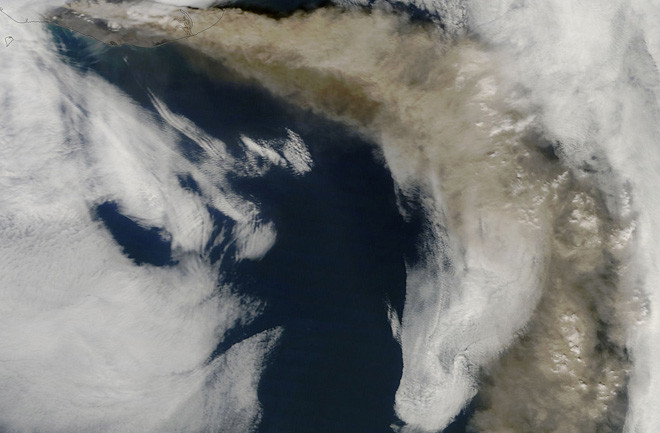 Eyjafjallajokull Volcano, Iceland, on May 6, 2010 captured by NASA's Aqua satellite. (NASA/GSFC/Jeff Schmaltz/MODIS Land Rapid Response Team) Quick report from the 2013 Geological Society of America Annual Meeting here in Denver. Sunday was a great day for petrologists and volcanologists, with more talks that I could attend without my head exploding. Rather than report on everything, I thought I'd talk about a couple talks I saw on Iceland. Most people think Iceland is almost entirely basalt because of its location on the midocean ridge, but thanks to the hotspot that also sits under the island, its magmatism is much more complex than simple basalt from the mantle. Over 10% of the surface of Iceland is, in fact, composed of rhyolite or granite (or something compositionally close to that). So, there is a lot of silicic volcanism on the island. A talk by Tamara Carley on Icelandic zircon suggested that they aren't really like zircon in other parts of the world, likely due to two main factors. First, they seem to have a different Hf isotopic composition, which might be due to a different kind of mantle underneath Iceland. Oddly, the composition of this mantle looks to be changing over the last 20 million years. Second, their oxygen isotopic composition supports the idea that all the magma coming up under Iceland eats a lot of hydrothermally-altered crust (not surprising with abundant magmatism and water). Her study looked at zircon from all over the island, going back to as early as 20 million years ago, so it is an amazing record of changing magmatic processes made of thousands of zircon analyses. Olgeir Sigmudsson followed Carley's talk up with a look at the origin of magma from the 2010 eruption of Eyjafjallajokull. What I found most fascinating was that the volcano erupted 8 different compositional varieties of magma during the 2010 activity. He postulates that the magma erupted was produced by prolonged cooling of magma under Eyjafjallajokull and then new basaltic magma mixed with this silicic magma in differing proportions during the course of the eruption. This generated the wide suite of magma erupted. Eyjafjallajokull is different than some of the other larger volcanoes on the main ridge axis in Iceland (like Askja) as it only generates small volumes of magma that don't interact much with the Icelandic crust before erupting. Iceland, right now, is a hotbed (no pun intended) for studying how you can generate rhyolite magma from a basalt. These talks make it seem that we have some hints but much more work needs to be done to understand the overall systematics across the island and why volcanoes on and off the main ridge axis behave so differently.