The most complete remains of a mummified infant woolly mammoth were found in North America. 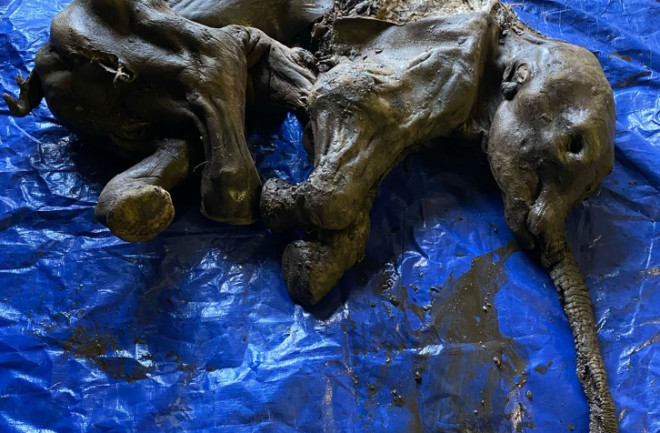 “This is a remarkable recovery for our First Nation,” says Trʼondëk Hwëchʼin Chief Roberta Joseph in a press release. “And we look forward to collaborating with the Yukon government on the next steps in the process for moving forward with these remains in a way that honors our traditions, culture, and laws. We are thankful for the Elders who have been guiding us so far and the name they provided. We are committed to respectfully handling Nun cho ga as she has chosen now to reveal herself to all of us.”

The Yukon is rich in ice age era fossils, however, finding one with skin and hair is rare. This is the most complete mummified mammoth to be found in North America.

“The Yukon has always been an internationally renowned leader for ice age and Beringia research,” says Ranj Pillai, minister of Tourism and Culture, in a press release. “We are thrilled about this significant discovery of a mummified woolly mammoth calf: Nun cho ga. Without strong partnerships between placer miners, Trʼondëk Hwëchʼin, and the Yukon government, discoveries like this could not happen.”

Geologists from the Yukon Geological Survey and the University of Calgary examined the remains. Their findings suggest that Nun cho ga is female and died around 30,000 years ago. Researchers also determined that Nun cho ga is roughly the same size as “Lyuba,” the 42,000-year-old remains of an infant mummified woolly mammoth discovered in Syria in 2007.

“As an ice age paleontologist, it has been one of my lifelong dreams to come face to face with a real woolly mammoth,” says Grant Zazula, a Yukon paleontologist, in a press release. “That dream came true today. Nun cho ga is beautiful and one of the most incredible mummified ice age animals ever discovered in the world. I am excited to get to know her more.”

The recovery efforts were a collaboration between Treadstone Mining, Trʼondëk Hwëchʼin and the Government of Yukon. They, along with researchers, are eager to find out what Nun cho ga’s remains can tell them about the world and environment she lived in before her premature death.