Everything Worth Knowing About the Giza Pyramids 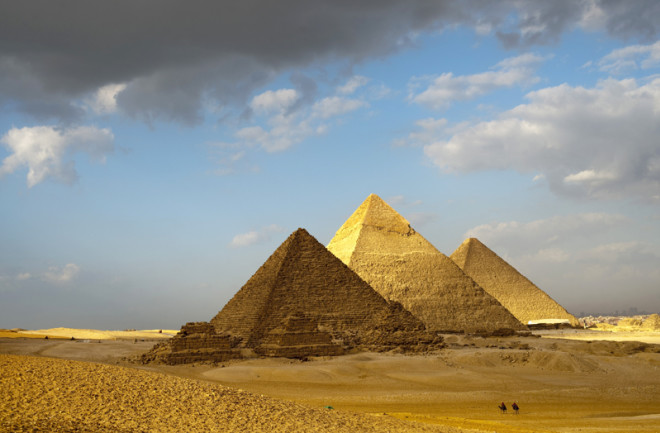 Rising above a desert plateau near Cairo are three giant pyramids. The most famous of them is the Great Pyramid, and together, they’re the only structure among the Seven Wonders of the World that is still mostly intact.

Extraordinary feats tend to inspire extraordinary explanations. Space aliens! Super-advanced lost civilizations! But the truth is even more interesting. Three Egyptian pharaohs overseeing tens of thousands of workers built the iconic structures at Giza within a 70-year span during the Fourth Dynasty (2575-2465 B.C.), 4,500 years ago. Recent archaeological discoveries, including the diary of an inspector involved in pyramid construction, explain more about how the pyramids were built and who built them — but many questions remain.

All in the Family

The Giza pyramids were the brainchild of three generations of Egyptian kings. Khufu, the oldest of the three, was the father of Khafre. And Khafre was the father of Menkaure. Each pyramid is thought to be the final resting place of the king who ordered it built.

Khufu’s pyramid  c. 2580-2560 B.C. Known as “The Horizon of Khufu” during construction and later, the Great Pyramid. With its base almost perfectly square and its outer casing of stone precisely fit, Khufu’s structure is not only the largest, but also the best built of all Egyptian pyramids. Area: 13.1 acres Original height: 481 feet

Why Were They Built?

The Giza pyramids were tombs for royalty. Scholars say the shape was meant to help the king ascend to the sun god and ensure immortality. The pyramids’ angled sides might have been inspired by the spectacle of slanted sunbeams striking the earth.

In 2013, Pierre Tallet, an Egyptologist at the University of Paris, Sorbonne, and his team found papyrus scraps stuffed between stones in a building at a Red Sea harbor used during Khufu’s reign. It was part of a day-to-day log by an inspector named Merer, who oversaw a cargo boat crew transporting limestone from Tura to the Giza Plateau. Merer refers to the Great Pyramid as “The Horizon of Khufu” and calls a harbor at the pyramid site “Khufu’s pool.”

Within about 500 years, grave markers in ancient Egypt progressed from simple mounds to timeless architectural wonders.

Predynastic, 4600-3000 B.C.: Dirt Mounds The ancient Egyptians believe that creation sprang from a primeval mound. This might have prompted them to bury their dead beneath piles of dirt, perhaps believing that this aids rebirth to the afterlife.

Third Dynasty, 2686-2613 B.C.: Step Pyramids  Builders begin stacking mastabas one on top the other, each smaller than the one below it. Pharaoh Djoser builds a six-step pyramid at Saqqara, 10 miles south of Giza.

Early Fourth Dynasty 2613-2494 B.C.  Bent Pyramid: King Sneferu, father of Khufu and the first king of the Fourth Dynasty, builds the so-called Bent Pyramid at Dahshur, 14 miles south of Giza. It is the first large-scale project to create a monument with sloping triangular sides. But the ground is softer than expected, so to avoid the pyramid’s collapse, laborers reduce the slope’s angle at the top, creating the pyramid’s bent look.

The pyramids’ blocks were cut at Giza quarries and sites along the Nile. They were transported to the construction site in various ways.

... By Sledge The cut blocks were likely placed on sledges and pulled by men or cattle. Water or some other fluid poured on the sand in front of the sledges would have reduced friction.

Researchers have simulated the labor many times. It’s doable with proper technique and enough muscle. One notable pyramid construction simulation, in 1991, used ancient Egyptian tools and methods to build two sides of an 18-foot pyramid in 21 days. During construction, about a dozen men pulled a rope attached to a sledge loaded with a 2-ton block. “We had no trouble moving these blocks around,” says Richard Redding, a research scientist at the Kelsey Museum of Archaeology at the University of Michigan.

... By Boat White limestone once covered Khufu’s and Khafre’s pyramids. (Some still remains atop Khafre’s.) “When the sun hit this white polished limestone, the reflection would’ve been seen across the valley,” Redding says. The white limestone came from a quarry at Tura on the Nile’s east bank, 8 miles away. Granite beams for inner chambers were quarried in Aswan, hundreds of miles south along the Nile.

The Tura and Aswan blocks were transported by cargo boat to the Giza Plateau. Before dams were built in modern times, the Nile flooded its banks from August through October. The water would lap up to the pyramid construction site.

Sand contour analysis and 72 sediment core samples, collected in the late 1980s by a British-American company, indicate that the Egyptians dug canals and harbors on the flood plain to aid passage of cargo boats. “They were cutting away the surface of the plateau to create these deep harbors, some deep enough to remain flooded during the low season,” says Glen Dash, a surveyor of the Giza area.

How did the Egyptians stack multiple-ton blocks to create a pyramid hundreds of feet high? Scientists and historians have proposed many theories, from elaborate ramps to pulleys tugging blocks up the slanted sides and fulcrums maneuvering them into place. But the exact methods remain unknown.

Most researchers agree that the construction involved ramps of some kind, likely made of gypsum, clay and limestone debris, especially since ramp remnants are still on the plateau. But there’s little agreement how the ramps were used in pyramid construction.

A Straight-on Ramp would have to be extremely long to achieve the low grade necessary to transport the blocks, extending far beyond the quarries — an engineering feat in itself. This type of ramp also doesn’t solve how the blocks were moved to specific spots on the pyramid.

A Switchback or Wraparound Design is the most accepted. The ramp likely was built up from the ground and hugged the pyramid. Workers would pull sledges loaded with stones up the ramp for placement.

The Ramp Rubble was dumped back into the Giza quarries after completing the pyramids. “They should have been filled with blown-in sand,” Redding says of the quarries. “But instead, they are filled with rubble.”

Judeo-Christian tradition characterizes the ancient Egyptians as slaveholders. And the Greek historian Herodotus, who lived about 2,000 years after completion of the Giza pyramids, wrote that slaves built the pyramids. But recent scholarship offers a different possibility.

Hieroglyphic inscriptions and graffiti on monuments suggest that masons, surveyors and other skilled laborers worked continually at Giza. The grunt work of pulling and lifting the stones was likely performed not by slaves, but by young men from farming villages in the region, Redding says. But it’s probable the men didn’t have much choice.

Ancient Egypt was more or less a feudal system. Nearly everyone owed service, or bak, to citizens higher in the social hierarchy, and that included service to the pharaoh. During the rainy season, when the farming fields were flooded, men were conscripted by the thousands to work on the pyramid projects, says Donald Redford, a professor of classics and ancient Mediterranean studies at Penn State.

Surrounding the Giza pyramids are remnants of worker settlements and cemeteries. The Wall of the Crow, within walking distance of the pyramids, shows evidence of occupation during the Fourth Dynasty when Khafre and Menkaure ruled, researchers say. Excavation has revealed bone piles of slaughtered animals, suggesting the workers were well fed. “They got better food than what they would get in the villages,” says Redding, who did the site’s animal analysis. Nearby is a workers’ cemetery; the skeletons show medical care for injuries like fractures and no signs of abuse. “They took great care of them,” Redford adds.

Were the unskilled laborers disgruntled? Perhaps not, some researchers say. Being at a location bustling with action and thousands of people for a few months was probably exciting for young men from rustic villages. And because bak was woven into the culture, some say laborers might have felt that, through their work, they were improving their future. “By assisting the pharaoh in the afterlife, and making sure he could forever stand beside the gods and intercede for you … you were acting in your own interest,” Redding says.

The pyramids overlooking Cairo are the only structures among the Seven Wonders of the World mostly intact. Will and Deni Mcintyre/Science Source

End of an Era

The high point of Egyptian pyramid construction ended around 2510 B.C. with completion of Menkaure’s Pyramid, a mini-monument compared with Khufu’s and Khafre’s. “They really couldn’t muster the manpower or finances to do it again,” Dash says, “which is why from that point on the pyramids got smaller and simpler.”