All the major planets—and almost all of our space probes—obit above the Sun's equator, trapped in a sideways perspective. 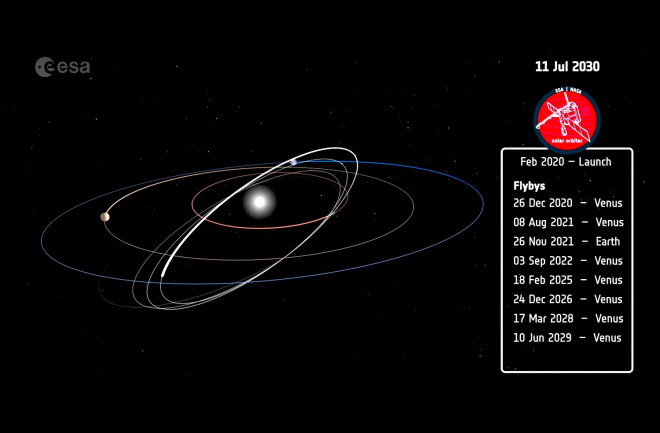 Over the next few years, the Solar Orbiter probe will twist itself out of the plane of the solar system to provide the first clear views of the Sun's polar regions. (Credit: ESA/ATG Medialab)

The European Space Agency's Solar Orbiter, launched on February 10, is going where no space probe has gone before: over the north and south poles of the Sun. Six decades into the space age, robots have roamed the deserts of Mars, swooped past the rings of Saturn, and hopped across rubble-strewn asteroids. And yet, strange as it sounds, Solar Orbiter is the first mission that will show us what the Sun looks like from above and below.

Our blinkered view of the Sun is rooted in a much broader limitation in the way we view the solar system. All of the planets orbit in roughly the same plane, circling almost directly above the equator of the Sun. Since Earth is right there in the mix with the other planets, we are looking out at them from within that plane, and we therefore see them all sideways relative to the Sun. Any spacecraft that we launch starts out in that plane as well, swept along by the angular momentum of Earth's orbit.

We can't help it. We're always giving the rest of the solar system the side-eye.

Seen from the side, our solar system is extremely flat. The "invariable plane" is the solar system's centerline, defined by the total angular momentum of all the planets. (Credit: Corey S. Powell/Joseph Boyle)

In fact, we've been doing it since the very earliest days of astronomy and astrology. The path that the Sun follows through the sky over the course of the year is known as the ecliptic. It is defined, naturally, by the orientation of Earth's orbit. Since all of the other planets are coplanar with Earth, they follow very nearly the same path through the sky as the Sun does--that is, they all track the ecliptic as well.

The ecliptic was of great interest to early skygazers, since it was obviously imbued with some celestial significance. The ecliptic cuts through twelve main constellations in the sky, and these constellations became enshrined in ancient Egyptian and Greek astrology as the signs of the zodiac. (In the modern, formalized versions of the constellations, the ecliptic also passes through a thirteenth constellation, Ophiuchus. It's pronounced "off-ee-YOU-kuss," in case you ever decide to invoke it to confound people who believe in astrology.)

As the mysticisms of astrology gave way to the scientific investigations of astronomy, it became clear that there truly is celestial significance to the ecliptic. It's no coincidence that the planets all circle the Sun in the same plane; clearly, it reveals something fundamental about how the solar system originated.

Stars form by the collapse of interstellar clouds of gas and dust. Any random motions within those clouds get concentrated as the cloud shrinks, causing it to spin. The dynamics of a spinning cloud cause it to flatten into a disk, with most of the mass concentrated in the middle. That middle object becomes a star; the material in the flattened disk gives rise to planets; and the planets all orbit in the same plane, aligned with the rotation of the star, because they all emerged from that single flattened structure.

Until recently, this story was rooted mostly in dynamical models and in measurements of the properties of extremely young stars. Observations made using the ALMA observatory, which can produce high-precision images taken in millimeter-wave radiation, now show forming planetary systems in exquisite visual detail. The flattened-disk structure of these systems is plainly visible. So, too, are dramatic rings and gaps, thought to be related to the places where newborn planets are disrupting material in the disk.

A survey of newborn stars using the ALMA Observatory shows them surrounded by huge pancakes of material, called protoplanetary disks, where planets are being born. (Credit; Andrea Isella/DSHARP/ALMA)

That's a lot of beautiful history behind our sideways style of looking out at the heavens. Being stuck in one plane poses some serious challenges to exploring the solar system, however. When we go to visit a planet up close, we can slip above and below to get a look at it from all directions. The Cassini spacecraft took some breathtaking images of Saturn and its rings from above, for instance, and the Juno probe is currently capturing remarkable details about the polar storms on Jupiter.

If you want to get out of the plane of the solar system as a whole, though, that's a much more difficult proposition. Prior to Solar Orbiter, there was only one mission deliberately designed to do that. The Ulysses spacecraft (a joint mission between NASA and ESA) used Jupiter's gravity to flip itself into a perpendicular orbit. From 1992 to 2008, it studied the Sun's magnetic field and the solar wind high above the solar poles. It did not have any imaging cameras, however, and it was observing the Sun from a great distance, roughly the same distance out as Jupiter.

In the 1980s, NASA's Voyager 1 and Voyager 2 probes also broke free from the plane of the solar system, though more as a byproduct of their other explorations than as a deliberate goal. Voyager 1's final encounter with Saturn and Voyager 2's encounter with Neptune bent the paths of the two crafts, so that they are both flying off about 30 degrees away from the ecliptic. But every major space probe since Ulysses has remained trapped within the tyranny of flatness.

The lack of higher perspective is especially a problem for scientists trying to understand the Sun and the ways its activity affects the Earth. The Sun's intense magnetic field that creates distinctly different conditions over its poles than over its equator. The Ulysses probe verfied that disparity, but could make only distant measurements. NASA's Parker Solar Probe, now making increasingly close sweeps past the Sun, is capturing up-close details about how the Sun launches powerful plasma explosions into interplanetary, but it once again sees the Sun only from the side.

That's where Solar Orbiter comes in. It will fly repeatedly close to Venus, using the planet's gravity like a springboard that will push the spacecraft up to 33 degrees out of the plane of the solar system. Solar Orbiter includes much more advanced instruments than the ones aboard Ulysses, and unlike its predecessor it will examine the Sun at close range--less than one third of Earth's distance from the Sun.

Getting out of line with the planets will also be essential for exploring some of the most intriguing objects of the outer solar system. Far from the Sun there are whole families of objects that don't follow the orderly arrangement of the solar system's original disk. Pluto is tilted 17 degrees relative to Earth, for instance, and other objects beyond Neptune ended up in far more extreme arrangements. Probably we are seeing the results of chaos in the early solar system, as the forming planets violently scattered smaller bodies that became comets, Kuiper Belt Objects, and other distant populations.

One object, currently designated 2002 XU93, is tilted 78 degrees relative to the ecliptic. Some other objects could be in orbits tipped a full 90 degrees! Planet 9, if it exists, is inferred to be orbiting at about a 30 degree inclination. Pluto's engimatic cousin, Eris, it tipped 44 degrees. Even within the asteroid belt, much closer to Earth, the giant asteroid Pallas circles the Sun at a 35 degree skew.

These off-kilter are all of particular interest precisely because they don't abide by the normal sideways rules. Pallas may be a surviving proto-planet that never got incorporated into any of the main planets; its surface appears to be heavily battered by impacts as its tilted orbit carries it repeatedly through the thick of the asteroid belt. Eris is a puzzling counterpart to Pluto, slightly smaller but more dense. Is it also a complex, dynamic world? Did Neptune kick it into its current orbit. Nobody knows.

Far from the Sun, flat and orderly orbits give way to dramatic angles. Exploring the solar system's extreme side will require learning how to break free of our sideways life. (Credit: James Tuttle Keane/Caltech)

And if astronomical sleuths Konstantin Batygin and Mike Brown ever finds the long-sought Planet 9, we will certainly want to know more about this extreme member of the solar system. Visiting it up close will require a much fast type of propulsion than what we have today, but will also require learning to navigate out of the rut of the ecliptic.

Solar Orbiter is a small step, but a crucial one. It will demonstrate how to rise out of the plane of the solar system without using the gravitational pull of a giant planet. And along the way, it will literally show us another side of the Sun.