The idea that electricity could be used to jumpstart life doesn't just come from fiction. Like Dr. Frankenstein, Aldini's grisly experiments sought to prove that it's possible to revive the dead. 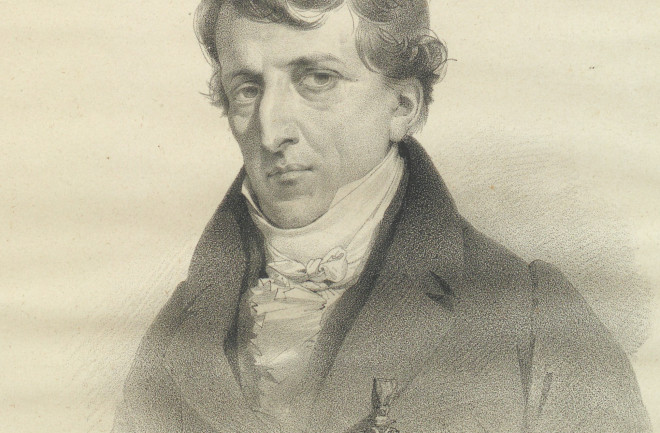 On a frosty day in January 1803, George Forster was executed at Newgate Prison for the supposed drowning of his wife and daughter — and his body was left hanging in temperatures two degrees below freezing for two hours afterwards. Perfectly chilled, he was hastily carted the mile long journey to London’s Royal College of Surgeons’ anatomy theater.

Inside, the room was a see-and-be-seen event, says science historian Iwan Morus. The oval theater was packed with British scientists, dignitaries and doctors, all eyes focused on a wooden slab covered by Forster’s body. At the helm was 40-year-old Giovanni Aldini, a man on a mission, says Morus. “He’d spent most of the last decade working to exonerate his uncle, the great Luigi Galvani,” Morus adds, explaining that Galvani had been dismissed from the faculty at the University of Bologna for refusing to swear allegiance to Napoleon. After losing his position, he died penniless a year later.

According to enlightenment historian Thomas Broman, electrification — the process of charging something with electricity — was already a fad in Europe, particularly in 18th century salons, a prominent gathering place for intellectuals at the time. But it was in that theater that Aldini sought to prove his uncle’s theory of galvanism, or the medical use of electricity to stimulate nerves and muscles. The theory, says Broman, held that “electricity flowed from the brain and supplied the body with vital force.” Galvini himself referred to the phenomenon as "animal electricity," believing it was a distinct form of energy.

In short, by charging Forster's corpse with direct electrical current, Aldini hoped to proved that electricity in the body did not end with death — and could even be used to revive the deceased.

Forster, the other star of the main event, was an unwitting (if not potentially innocent) bystander, says Morus. The evidence against him was all circumstantial. No one saw him plunge his wife and daughter into London’s Paddington Canal. Unlike the guillotines of France, Forster would keep his head at execution, but there was no guarantee after death.

While Forster may have been a victim, Aldini certainly didn’t see himself that way. He’d risked at lot be here. With the French Revolution still in the backdrop, it was a dangerous time to be alive. Morus described Aldini as a “nonconformist” in opposition to the church. The theory of animal electricity would have been antithetical to religion because it meant that human potential wasn’t controlled by the soul. And for reasons like these, “Aldini likely would have lived on the edges of polite political society,” he says.

Aldini thought little of the bodies he attempted to revive, often those of executed criminals or people from the fringes of society, says Morus. Historian Helen MacDonald writes that Aldini loved “to make the dead perform tricks.” Further, Aldini commended so-called "enlightened laws" in England that allowed criminals to atone for their crimes after execution by becoming subjects of experimentation, writes MacDonald.

The crowd cooed with enthusiasm as Aldini applied electrical rods to Forster’s body. They watched in awe as “his jaw quivered, his left eye opened, and his face convulsed.” Eight hours of experimentation followed — the climax came when electric arcs were attached to Forster’s ear and rectum and “the resulting muscular contractions [gave] an appearance of reanimation.” Eventually, the battery died. Aldini would later describe the event in his book, An Account of the Late Improvements in Galvanism. Ultimately, he considered the experiment a failure, as Forster hadn't sprung back to life, but doctors who witnessed the event say they considered it a miracle.

Animal electricity proved to be only partially true. While the muscles of humans and animals contract due to electricity, that same vital force does not come from the brain. “While electrical force might twitch muscles, it cannot revive the dead," says Broman.

Aldini’s work would also predate other forms of electrification. Electroshock therapy or electroconvulsive therapy (ECT), for example, was invented in the 1930s by an Italian psychiatrist named Laszló Meduna to relieve symptoms of depression. And although ECT has remained deeply controversial, research has also shown that it provides some patients with great relief.

But perhaps most famously, Aldini also inspired the work of author Mary Shelley. In the preface of her novel Frankenstein, she wrote that galvanism had proven that life could be revived. As Shelley began to write Frankenstein in 1816, she might have been picturing that same anatomy theater where Forster was put on display.

Shelley was, after all, no stranger to death. At just 20 years old, as a young wife, she had already lost a child and had her half sister commit suicide. Maybe she dreamed of reviving those lost, but whatever the reason, Shelley would later pen the preface of her groundbreaking novel with a note that highlighted the ultimate promise of Galvani and Aldini’s work: “Perhaps a corpse would be re-animated."