As humans look toward longer missions in space, NASA scientists are exploring how mushrooms might make the journey more feasible. 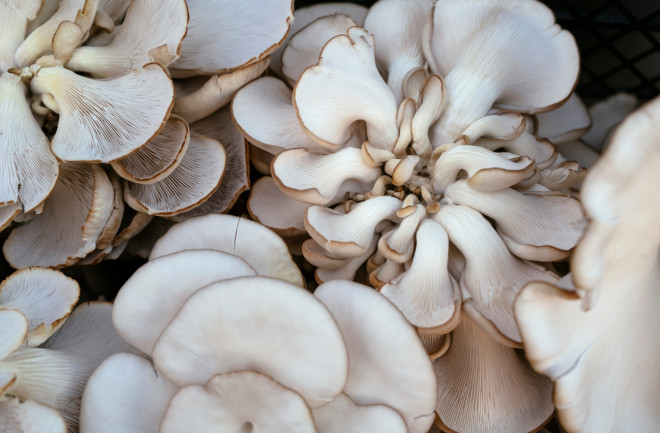 Imagine a long-term, manned mission into space: Astronauts moving about in artificial gravity, conducting research and sending signals back to Earth while they probe farther away. Maybe they land on the moon or Mars, or perhaps they sail past countless planets, stars and asteroids. When the astronauts get hungry, there’s freeze-dried food, of course — but carrying enough to feed an entire crew for multiple years would take up a lot of space. Some missions have had success growing plants in water, a method called hydroponics, but that requires a continuous resupply of nutrients from Earth.

So, scientists began thinking: What if we made soil in space?

That’s where fungi comes in. UCLA administrator Jane Shevtsov has teamed up with NASA scientists and researchers at the mushroom company Fungi Perfecti to explore how fungi could help turn asteroids into soil. The idea initially came to Shevtsov while she watched a video about the role of fungi in early soil formation on Earth. “I bet fungi can digest the organics in the asteroid because they do that kind of thing on Earth, and maybe they can even make soil out of that,” says Shevtsov. “So, let’s feed asteroids to fungi.”

Of course, all of this is part of an even larger research goal — not just to unlock the secrets of the universe, but to see if we could survive within it. Space is no longer viewed as a large, empty expanse. Instead, it’s often framed as a potential last hope for humanity: a place to go when we’ve wrecked our own planet. Some are thrilled by the prospect of space settlements; others fear we’ll carry our problems with us. Either way, science must first prove that we can survive, and fungi are playing a leading role.

Shevtsov and her colleagues began with simulated asteroid regolith — a kind of loose rock made by researchers to be chemically similar to the kind found in asteroids — and 15 mushroom species, although the team quickly narrowed down their search to just three species that showed the most promise in breaking down the regolith. The winner, ultimately, was the oyster mushroom (Pleurotus ostreatus), a white-rot fungus known for breaking down complex hydrocarbons.

The researchers provided the mushroom with an additional food source to get it started, and sure enough, before long it successfully colonized the simulated regolith. The results are still preliminary, but they’re promising; Shevtsov suspects that — with the help of the oyster mushroom — scientists could grow plants in the regolith within one to three years.

To her, there are obvious advantages to soil-based food production systems over other options like hydroponics. Besides the fact that we already know how to grow things in soil, we also know how to compost, meaning that disposing of inevitable human and plant waste would be much easier. Additionally, gardens are easier to scale than hydroponic systems and the green space they provide could help astronauts feel more at home — wherever they end up.

Shevtsov sees this method as being particularly useful in the context of space mining, because leftover asteroid rock could be used to create soil. But similar approaches could be explored on the moon or Mars, too, where long-term settlements would require food and nutrient recycling. “The asteroid approach is good for if you’re in free space or in orbit,” says Shevtsov. “If you're on the moon or on Mars, that’s a completely different situation. You want to work with what’s there.”

Shevtsov is also working on a proposal to support plant growth in regolith on Mars. As a systems ecologist, she’s focused on how to build and maintain a healthy ecosystem in space and hopes to accomplish that by combining multiple species — bacteria to break down toxic compounds, plants to provide a carbon source for bacteria, mycorrhizal fungi to support plant growth. Part of that work now involves learning how to use light, temperature and other biological signals to promote photosynthesis or respiration as the ecosystem needs them.

When it comes to astronauts eventually settling down on another planet, however, we run into a similar problem as before; carrying your home with you through space — what astrobiologist Lynn J. Rothschild calls the “turtle approach” — takes up a lot of mass. Instead of lugging around all that building material, what if you could grow your home once you got there?

In another NASA project, Rothschild is exploring how we might build structures from fungal mycelium, the long, thread-like structures that mushrooms form into a mat underground. She and her colleagues have been working to create a woven material out of mycelium that grows into whatever shape they want. The ultimate goal is to build homes and other constructions, using a structure Rothschild likens to a blow-up bouncy house: A layer of fungal mycelia serves as the walls, and an outer layer prevents the fungi from escaping onto the surface of the Red Planet or the moon.

“You have to worry about planetary protection, especially on Mars, because there’s always the possibility that there is life there, so we’re governed by all sorts of rules about putting stuff out on the planet,” says Rothschild. “It would be an enormous scientific tragedy if there was another lifeform there and we didn't know because we leaked organisms all over and we couldn’t tell what was us and what was them.”

It sounds like science fiction, but the research has been underway for years. In 2018, Rothschild supervised a team of students who designed a “mycotecture,” or fungal architecture, project for the synthetic biology competition iGEM. The team is also working with the sustainability-focused restaurant Azurmendi in Spain to design tables, chairs, menus and other furniture made out of mycelium — bringing this space-focused technology back to Earth. The researchers will move forward by testing their mycotecture in planetary simulators, to see how they fare under differing gravity and radiation conditions.

Ultimately, though, Rothschild is optimistic that fungi will soon start cropping up off-planet: in walls, furniture, even shells for rovers. “It's not like we have 15 years of genetic engineering to do,” she says. “We know what needs to be done, it’s a matter of making sure it works under the conditions you’re going to find off planet and then making sure that NASA has confidence that this will protect their rovers or their astronauts.”