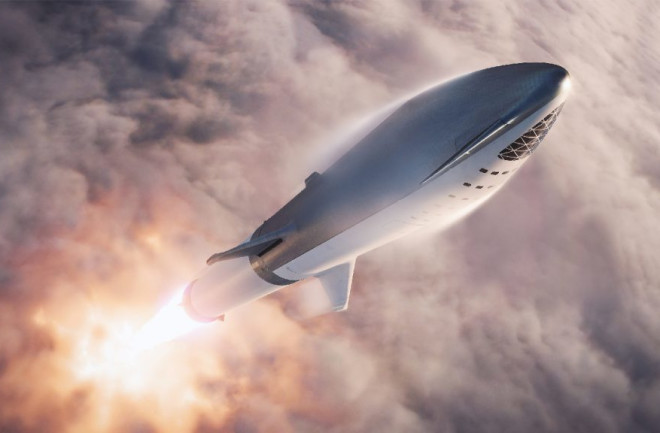 The private rocket company laid out a handful of groundbreaking plans over the weekend. (Credit: SpaceX)

Elon Musk gave a barrage of updates on the future of SpaceX as he stood in front of the company’s new Starship and original Falcon rockets on Saturday in Boca Chica, Texas. During the presentation, Musk touched on the details in Starship’s design, the possibilities for the craft, and the timeline of what’s to come in the near future.

SpaceX thinks Starship could bring a human settlement to the moon and Mars. Once complete, the craft will consist of two parts: the ship itself and the booster. The booster will have room for a whopping 37 of SpaceX’s Raptor rocket engines and the ship could hold a crew up to 100 people.

With the update, the aerospace community learned more about the plans for Musk’s next line of rockets. Here are five of the biggest takeaways from the night.

1. According to Musk, a Starship prototype could reach orbit within six months. And crewed missions could start within a year.

“This is going to sound totally nuts,” Elon said as he got ready to deliver the news. “But I think we want to try to reach orbit in less than six months.”

Just a month ago, the original prototype, Starhopper, completed its first test flight. So the idea that the ships may reach orbit within a year was greeted with some skepticism. Reaching orbit is a difficult feat for many aerospace companies, including SpaceX, but Musk didn’t hold back in sharing his optimistic vision of the future.

In terms of a timeline, in one to two months, Mk1, the first prototype of Starship, will make the same flight that Starhopper made a month ago, flying up to 65 feet (20 m). Mk2, the prototype being built in SpaceX’s Cape Canaveral location, will be finished within the next few months. Meanwhile, in about one month, Mk3 will begin construction in Boca Chica. Musk doesn’t see the prototypes reaching orbit until this third phase or later.

Musk sees at least two prototype rockets being built in each location before work starts of the first versions of the booster are started. The key to starting work on the boosters is having enough Raptor engines to support the prototypes.

Starship, according to Musk, could see crewed missions by next year.

2. Starship will be able to refuel in low-Earth orbit

A critical part of Musk’s mission to set up a city on Mars is making sure a Starship craft could reach the surface of the Red Planet. Low-Earth orbit refueling could be a vital step to enabling that journey. While still in the lower part of Earth’s orbit, Musk says Starship will be able to take fuel from another craft. This will allow Starship to bring up more payload to orbit, which would be vital, according to Musk, if Starship is bringing building supplies to the moon or Mars for future bases.

Musk compared the process of orbital refueling to how current SpaceX crafts dock to the International Space Station.

3. The landing sequence is different than most spacecraft.

Instead of landing like a plane as the Space Shuttle program did, Starship will come toward the landing area at about a 60-degree angle. It’ll then fall “like a skydiver,” before turning to land upright on the launch pad.

4. Starship will be a rapidly reusable spacecraft.

Musk predicts this reusability will allow the line of ships to move through testing much faster. Instead of having to rebuild the ship every time a test happens, the craft could fly multiple times within a span of days.

5. SpaceX is betting on the future of Boca Chica.

Boca Chica, the small village in far southern Texas that’s home to SpaceX’s newest launch facility, will see a lot of changes with the growth of the company, including more buildings and facilities at the remote location.

“It’ll definitely be fancier than it currently is,” Musk said.

Eventually, the launches may become a safety hazard for the small population of Boca Chica Village. There’s not a serious risk to the residents of Boca Chica, but there’s enough of one that it could become a concern. And that’s prompted Musk to confirm that he offered to buy the village of Boca Chica in the future.