Astronaut food has drastically improved over the decades, but the monotony of the menu remains a challenge for long-term spaceflight. 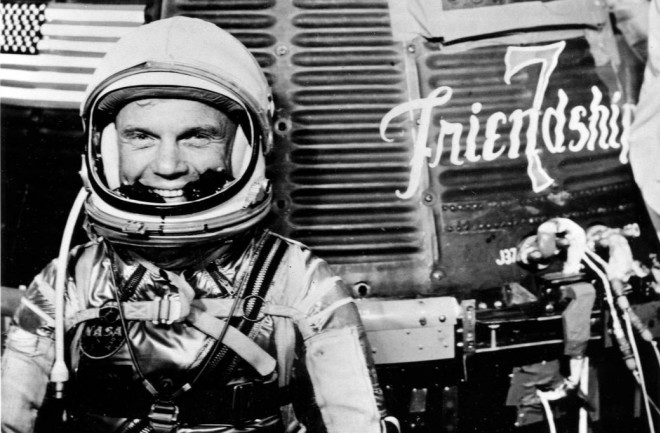 John Glenn was the first American astronaut to eat food in space. NASA’s in-flight menu included applesauce served in a toothpaste-tube-like container, as well as sugar that Glenn dissolved in water. (Credit: NASA)

The dawn of the Space Age left an entire generation fantasizing about becoming astronauts, floating free above Earth’s surface with a window directly to the stars. But humanity might have reconsidered those daydreams if they knew what astronauts had to eat.

The first meals in space were rather revolting affairs. And while astronaut food has slowly improved, modern spacefarers still come home pining for their favorite dish — and complaining about the grub in orbit.

When NASA astronaut Christina Koch returned from her record-breaking 328-day spaceflight earlier this month — the longest ever for a female astronaut — she was desperate for chips and salsa. You can’t have crunchy food on the International Space Station, she explained to The Associated Press; the crumbs might be hazardous to equipment.

In 1961, Soviet cosmonaut Yuri Gagarin became the first human to orbit Earth. He also was the first person to eat in space.

Gagarin’s crumb-free meal featured two portions of pureed meat, stored neatly in toothpaste-tube-like containers. To eat it, he simply squeezed the food directly into his mouth. And for dessert? Mission planners were kind enough to include a tube of chocolate sauce.

Glenn’s meal selection wasn’t any better than Gagarin’s, but at least NASA packed him a straw. Glenn was served up a tube of applesauce, plus some sugar tablets that he dissolved in water. He was also issued pureed beef and vegetables in a tube, which now belongs to the National Air and Space Museum.

This is what mealtime looked like for Mercury astronauts. Astronaut food included bite-sized cubes and dense purees packed into tubes. (Credit: NASA)

At the time, scientists had bigger concerns than pleasing astronaut taste buds. No one knew how the body would react to eating in a zero-gravity environment. Would Glenn be able to swallow and digest food? Fortunately, his body handled the space meal just fine. But that wasn’t the end of eating foods that looked more like toothpaste. Throughout the Mercury program — NASA’s early missions exploring orbital spaceflight — astronauts had to get used to sucking food from tubes. Other menu options included freeze-dried powders and bite-sized cubes.

It wasn’t until NASA advanced to the Gemini program and was prepping for the moon that the space agency finally heeded astronauts’ complaints. Gemini astronauts got to eat solid-ish food. The food-paste tubes were gone. The cubes were covered in gelatin to stop crumbs. And NASA stepped up its freeze-dried foods by putting them in plastic containers that made it easier for astronauts to turn them into something palatable, like a shrimp cocktail or chicken and veggies.

But that still wasn’t enough for some astronauts. Complaining about the grub in orbit is a timeless — and understandable — tradition among astronauts.

In the Gemini missions, astronaut Gus Grissom was so vocal about his disdain for NASA’s meal choices that, in 1965, pilot John Young smuggled a corned beef sandwich onboard Gemini 3 to share with Grissom. It was NASA’s first two-person mission, and the first meal shared in orbit. They had to stash the sandwich away after the first few bites, though, as crumbs of rye bread were floating through the cabin.

Not everyone appreciated the joke. Some members of Congress were so upset that they investigated whether the contraband cuisine endangered the mission.

By Apollo 17, the menu available to astronauts had improved drastically. (Credit: NASA)

By the time the Apollo missions kicked off, things had improved significantly. Astronauts could thank engineers for two major new developments: hot water and the “spoon bowl.” Hot water helped astronauts more easily reconstitute freeze-dried foods. The spoon bowl consisted of a plastic bag that could be unzipped so its contents could be eaten with a spoon, creating a more earthly eating experience.

But why freeze-dry astronaut food? Simple: Removing enough water prevents bacteria from being able to grow. This is still a popular way of serving food to astronauts today, though there’s now a much wider selection of foods from which to choose, which is largely due to more available real estate.

Astronauts are already growing greens in space, using the International Space Station’s Advanced Plant Habitat. Above, the crew prepares to measure the height of wheat samples grown in orbit. NASA is slowly learning to produce small amounts of fresh food on the space station. (Credit: NASA)

Food on the ISS

The International Space Station has enough room to store the 200 different items on the modern menu, most of which need to be rehydrated. (NASA now even lets astronauts pack a warm sandwich with them at launch and eat it in orbit.) And while Mercury astronauts might envy the selection, Glenn’s first flight only lasted one orbit. Astronauts now stay in space for many months at a time, with the same selection of food offered to them week after week.

Even the seasonings are alien. Shaking salt and pepper in orbit could easily create an airborne hazard, so they have to be dispensed in liquid form.

“Everything is in a packet — steak, pasta, coffee. We either drink it through a straw or cut it open and eat it with a spoon,” Koch said in a recent NASA interview. “Some of us get creative, inventing strange food combinations — a cracker with rehydrated cocktail shrimp and sauce. We also develop techniques to spice things up; I use a syringe to inject coconut oil into my coffee drink bag.”

Catering to astronauts’ taste buds may seem like a light-hearted affair, but the psychological effects could be serious on a mission to Mars, which could last well over a year. Will the menu monotony take a toll? For Koch, the impact of life without crunchy food was enough to fixate on after 328 days.

“I haven’t had chips in about 10 and a half months,” she told the AP, adding “I have had a fresh apple.” On a Mars mission, astronauts likely couldn’t even expect that kind of fresh produce.