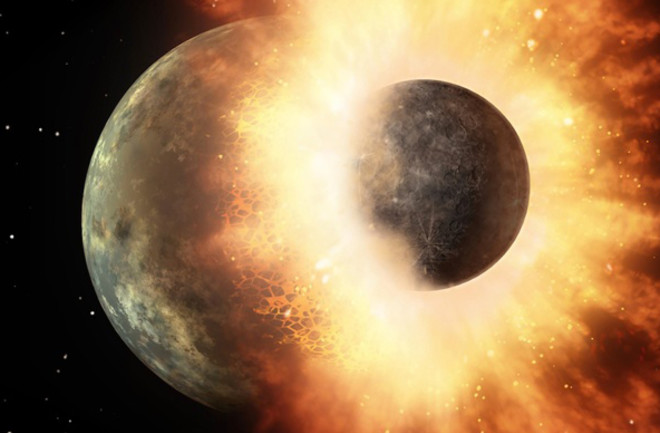 A planetary collision is exactly as bad as you would imagine. Unlike an asteroid impact, there's not just a crater left behind. Instead, such a massive crash causes the surviving world to be stripped of much of its lighter elements, leaving behind an overly dense core. (Credit: NASA/JPL-Caltech)

For the first time ever, astronomers think they’ve discovered an exoplanet that survived a catastrophic collision with another planet. And according to the new research, which was published Feb. 4, in the journal Nature Astronomy, the evidence for the impact comes from two twin exoplanets that seem to be more fraternal than identical.

The pair of planets in question orbit a Sun-like star (along with two other planets) in the Kepler-107 system, which is located roughly 1,700 light-years away in the constellation Cygnus the Swan.

This perplexing density discrepancy left researchers scratching their heads. How could two equally sized exoplanets in the same system (and at nearly the same orbital distance) have such different compositions?

To determine exactly why Kepler-107c is so dense, first the researchers considered what they already knew. Previous research has shown that intense stellar radiation can strip the atmosphere from a planet that sits too near its host star. But if the innermost planet lost its lighter atmospheric elements, it should be more dense than its twin, not less. According to the study, this would “make the more-irradiated and less-massive planet Kepler-107b denser than Kepler-107c,” which is clearly not the case.

However, there is another way that a planet can lose a lot of mass: by getting smacked with another planet. And this is exactly what the researchers think happened to Kepler-107c.

The researchers argue that the denser planet, Kepler-107c, likely experienced a massive collision with a third, unknown planet at some point in its past. Such a gigantic impact, the study says, would have stripped the lighter silicate mantle from Kepler-107c, leaving behind an extremely dense, iron-rich core. According to the study, Kepler-107c could be as much as 70 percent iron.

Because the mass and radius of Kepler-107c matches what would be expected from a giant planetary impact, the researchers are fairly confident that the collisional scenario they’ve outlined in their paper is accurate; however, they still need to confirm their hypothesis. If proven correct, this new find would become the first-ever evidence of a planetary collision outside our solar system.

Though astronomers have never confirmed a collision between exoplanets in another star system before, there is evidence that a similar cosmic crash occurred in our own solar system. In fact, a leading theory about the formation of the Moon is that it formed when a small protoplanet rammed into early Earth.

By analyzing lunar samples returned by the Apollo missions, scientists learned that the composition of Moon rocks is very similar to that of Earth’s mantle. Furthermore, the Moon is severely lacking in volatile elements, which boil away at high temperatures. Taken together, along with a few other lines of evidence, this indicates the Moon may have formed when a very large object (roughly the size of Mars) struck Earth with a glancing blow early in the solar system’s history, some 4.6 billion years ago.

This mash-up melted and tore off some of the outer layers of Earth, which may have temporarily formed Saturn-like rings around our planet. Over time, much of this ejected material drifted back to Earth’s surface, but there was still enough debris left in orbit that it eventually coagulated and formed the Moon.

With the discovery of Kepler-107c, it seems planet-shattering impacts are not just a sci-fi trope, but instead may occur much more frequently than we once thought. And with the long-anticipated launch of the James Webb Space Telescope coming up in March 2021, it may only be a few more years until they start to reveal themselves en masse, so be sure to stay tuned.