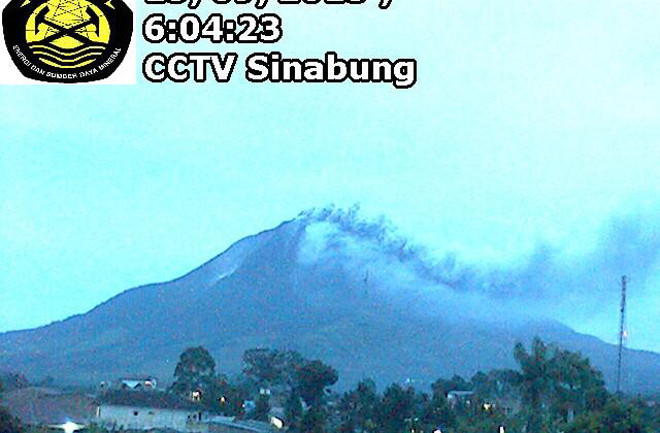 A PVBMG webcam image of the plume from Sinabung on September 15, 2013, after its first eruption in 3 years. Image: @infoseismic / Twitter. It appears that Sinabung on Sumatra has erupted from the first time in 3 years, prompting evacuations of people living near the volcano and dusting ash up to 50 kilometers (~30 miles) from Sinabung. This news caught me by surprise as I haven't seen much news of unrest at Sinabung (like increased earthquakes) -- however, today's report from the PVMBG (Indonesia's volcano monitoring agency) mentioned a small (~150 m) plume from the volcano along with a few hundred small earthquakes since the middle of August. You can see some video of the eruption filmed after day broke in Sumatra, showing a low grey plume (see above) coming from one of the vents active during the 2010 eruptions. Those eruptions during 2010 started with an unexpected explosion as the volcano wasn't even being monitored as potentially active volcano at the time. The difference now is that Sinabung has been quiet for over 100 years before the eruption in 2010. An evacuation zone of ~3 km has been set up around the volcano, meaning upwards of 3,000 people needed to move to shelters to avoid the potential hazards from this new activity. The PVMBG has raised the alert status at Sinabung to Level III (of IV) due to this new activity. The biggest question will be whether these new eruptions lead to continued activity, as the volcano was active for a few months during the most recent activity in 2010. There is a webcam pointed at Sinabung, so check it out to see if you can see any additional explosions.