For 16 years, NASA's Spitzer Space Telescope opened our eyes and made us all more than human. 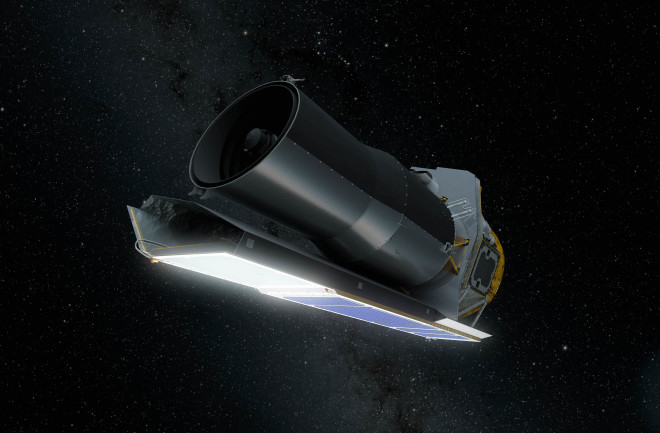 The Spitzer Space Telescope as it would have appeared to a nearby observer on January 30, 2020, the day its mission ended. At the time it was 264 million kilometers (164 million miles) from Earth, steadily drifting away. (Credit: NASA/JPL-Caltech/R. Hurt/IPAC)

If you are a longtime follower of astronomy news, you find yourself learning a lot of weird acronyms. When I was young, I was excited by four letter-jumbles in particular: LST, GRO, AXAF, and SIRTF, the abbreviated names for NASA's four Great Observatories. They would be launched into space to view the universe without the handicap of having to look through our planet's distorting atmosphere, with each observatory taking a unique perspective. LST would look at visible light, GRO at gamma rays, AXAF at x-rays, and SIRTF at infrared radiation, like light but with a longer wavelength.

All four of them eventually turned into real missions with real names. LST (the Large Space Telescope) became the Hubble Space Telescope. GRO (the Gamma Ray Observatory) became Compton. AXAF (the Advanced X-ray Astrophysics Facility) became Chandra. SIRTF—pronounced "SIR-tiff," the Space Infrared Telescope Facility—was the last one to be launched, in 2003, and now it is the latest of the four to come to the end of its life. NASA put it to eternal sleep on January 30, 2020, after 16 triumphant years of discovery.

SIRTF is better known by its final name, the Spitzer Space Telescope, in honor of Lyman Spitzer, Jr. What's in a name? In this case, a lot. Spitzer, the man, was a great visionary of 20th century astronomy. He was one of the first scientists to recognize that our galaxy is a dynamic place, pulsing with hot gas and still forming new stars. He was a pioneer in nuclear fusion research, founding the Princeton Plasma Physics Lab—still one of the world's leading fusion-energy research centers. Most relevant here, he also was the inspiration behind both the Hubble and the Spitzer Space Telescopes.

Lyman Spitzer, Jr, was a true adventurer--not just a pioneer in astronomy and physics, but a restless explorer, a member of the American Alpine Club, and the first person to climb Mount Thor in Nunavut. (Credit: OPO/STScI)

In 1946, Lyman Spitzer wrote a highly influential paper, "Astronomical Advantages of an Extra-Terrestrial Observatory." You can read a PDF reprint of the prescient document here. Spitzer's "preliminary survey" of doing astronomy from above Earth's atmosphere set the template for much of the space astronomy that followed in the next seven decades. In particular, he recognized that space telescopes could observe many forms of radiation that are normally absorbed by the air—including gamma rays, x-rays, and infrared rays—and so could see things that had never before been seen.

"The chief contribution of such a radically new and more powerful instrument would be, not to supplement our present ideas of the universe we live in, but rather to uncover new phenomena not yet imagined, and perhaps to modify profoundly our basic concepts of space and time," he wrote.

The Helix Nebula--the dying exhalations of an aged, sunlike star--was imaged in 2007 by Spitzer. The red section at the center consists of dust from comets and asteroids that were destroyed as the star died. (Credit: NASA/JPL-Caltech/K. Su/University of Arizona)

As compelling as his idea was, it was Spitzer's dogged follow-through that truly changed the world. Year after year, he spoke with skeptical colleagues, convincing them that a space telescope both could and should be built. After the launch of Sputnik made his concept seem much more feasible, he expanded his efforts at persuasion to government officials and to Congress. Those efforts led to NASA's Orbiting Astronomical Observatory program, starting in 1966 and culminating in 1972 with the highly successful Copernicus satellite, which carried an ultraviolet telescope that Spitzer helped design.

In 1965, before any of those observatories had even gotten off the ground, Spitzer was leading a National Academy of Sciences team to create a detailed concept for what eventually became the Hubble Space Telescope. NASA began work on the project in 1968. In 1974, Congress deleted all funding, as part of a post-Apollo, Vietnam-era cutback in U.S. space science. Spitzer and his energized allies in the astronomical community argued passionately for the intellectual, educational, and spiritual importance of the project. They also worked out a scheme to reduce the telescope's cost. Congress eventually came around, supporting not just Hubble but NASA's whole Great Observatory program.

Few people outside of academia remember that convoluted back story, but without Lyman Spitzer's efforts the "LST" concept would never have become the Hubble Space Telescope that continues to thrill us with its views of galaxies from the edge of space and time. The primary reason it wasn't named the Spitzer Space Telescope was NASA's policy of not naming missions after living people. Lyman Spitzer remained healthy and scientifically active at Princeton University until he died abruptly on March 31, 1997—in the middle of a normal workday—at the age of 82. SIRTF, which launched in 2003, got the honor of sharing Spitzer's name instead.

Ironically, the Spitzer Space Telescope bears less of Lyman Spitzer's imprint than Hubble does. (SIRTF might more plausibly have been named after Nancy Roman, NASA's first chief of astronomy and another leading advocate of space telescopes. She died in 2018, so maybe a proper memorial will come along soon.) But Spitzer the man and Spitzer the space telescope have a lot in common all the same: Both were visionaries fully devoted to expanding the range of human vision and to probing the great mysteries of deep space.

From the start of its mission on December 18, 2003, to its death this past week, the Spitzer telescope used its infrared sensors to examine 800,000 targets in total: billowing stellar nurseries, the dusty structures of spiral galaxies, and planets circling around other stars. In every aspect of its work, it vastly over-delivered on its promises.

Spitzer discovered an enormous outer ring, a hundred times the size of the bright inner rings, circling around Saturn. Material from this hidden ring may explain the strange appearance of the planet's outer moons. (Illustration credit: NASA/JPL-Caltech/R. Hurt)

Initially, Spitzer was supposed to operate for just 2.5 years. Its lifetime was limited by its supply of liquid-helium coolant: Warm objects emit their own infrared rays, and Spitzer would have been blinded by its own infrared glow unless it was cooled to -268 Centigrade (-450 Fahrenheit). By carefully managing the mission, NASA engineers were able to make the coolant last more than five years. Then they came up with another way to squeeze more life out of the observatory. They realized that some of the instruments could keep working even without coolant, and argued for an extended "Spitzer Warm Mission."

In the world of infrared astronomers, "warm" means -243 Centigrade, or 406 below zero Fahrenheit. Spitzer carried on another 11 years this way, essentially becoming a whole new infrared space mission at no additional cost. Eventually the telescope showed its age in other ways. Its orbit keeps it trailing farther and farther behind Earth around the Sun, making communications increasingly difficult and taxing the limits of its batteries. That's why NASA planners finally decided to put the bold space telescope to death. It will remain in solar orbit forever, perhaps someday becoming an interesting space artifact for future archaeologists—or for passing aliens.

The death of a spacecraft, like the death of a person, is a sad moment. Yes, I understand that Spitzer is just a machine made of metal and silicon and plastic and beryllium, but it is also the embodiment of all the human hopes and dreams that went into it. Lyman Spitzer lived on through his namesake space telescope, just as the triumphs of the Spitzer Space Telescope will live on in future missions and future studies.

The James Webb Space Telescope (whenever it actually launches) will explore the infrared universe in even finer detail. The upcoming Wide-Field Infrared Survey Telescope will take a more sweeping, panoramic approach to mapping the infrared sky. But really, every new discovery about the universe will be lit by sparks of inspiration from Spitzer, both the man and the machine.

There is no way I can summarize the gargantuan scope of Spitzer's legacy in one short post; you can spend hours on the Spitzer web site happily doing that independently (and I heartily encourage it!). I have flagged a few highlights in the images here, and want to close by highlighting one especially notable discovery.

Spitzer was instrumental in the detection of the remarkable TRAPPIST-1 planetary system, where seven Earth-size planets orbit a nearby red dwarf star:

The seven worlds of TRAPPIST-1 compared to the moons of Jupiter and to our own solar system. The miniature TRAPPIST-1 planetary system would fit easily within the orbit of Mercury; for now, we can only guess what those worlds really look like. (Credit: NASA/JPL-Caltech/R. Hurt, T. Pyle/IPAC)

This system will become an archetypal test case in the search for life beyond Earth. At least two of the TRAPPIST-1 planets circle in the habitable zone. Nobody knows whether they are truly habitable, much less whether life actually exists there, but this system is uniquely well suited to providing answers. Studying the seven planets will show how conditions can vary within a single planetary system. Learning about the conditions there will tell us whether small, red stars can sustain life-friendly planets.

Red dwarf stars are the most common kind, and planets like the ones around TRAPPIST-1 could be the most abundant abodes of life in the univese. The Spitzer Space Telescope has shown us where to look to find out if that is true. What we find there will, as Lyman Spitzer anticipated, change our basic conception of humanity's relationship to the cosmos.