Explosive Eruption in Japan Spews Plumes of Ash and Gas 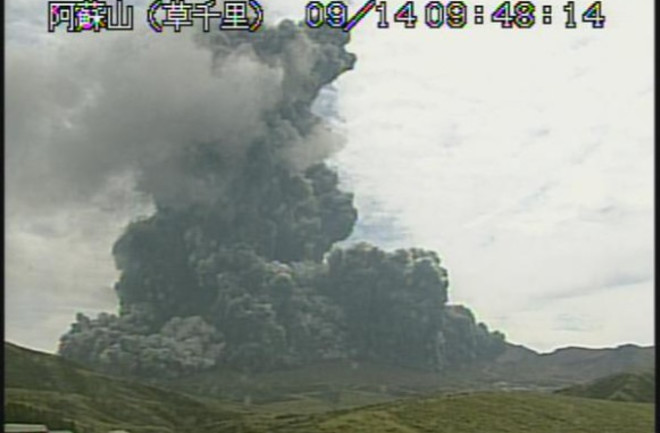 A shot from a Japanese Meteorological Agency webcam of the September 14, 2015 eruption of Aso. JMA WebcamAso, one of the more dangerous volcanoes in Japan, had an explosive eruption today. Based on webcam (see above) and news footage of the volcano, Aso produced a large, dark-grey plume of ash and volcanoes gases around 9:45 AM (Japan local time). The area around Aso was already on heightened alert status, so no injuries and fatalities have been reported so far after this explosion. However, tourists near the volcano (see below) have been evacuated at the alert status raised to Level 3, meaning no one is allowed near Aso. Flights to airports near Aso on Kyushu have also been diverted. The JMA webcam (14th from bottom) pointed at Aso shows only a white steam plume as of 11:20 AM local time in Japan, so this eruption appears to have been fairly brief. This is another in a series of small-to-moderate explosive eruptions that have occurred at Aso over the past few years, including strong activity in November-December 2014. Aso (also known as Asosan) is a caldera complex, with numerous vents that have been active over the last 100,000 years.

UPDATE September 15, 9 AM EDT: This animated GIF (below) shows the opening salvo of the eruption. The blast collapses pretty quickly (this video is sped up) into billowing dark pyroclastic flows ... however, combinbed with the lack of clear warning signs (like earthquakes or increased emissions), it strikes me as very much a potential phreatomagmatic explosion helped along by water. All areas within 4 kilometers of the crater

at Aso have been closed.