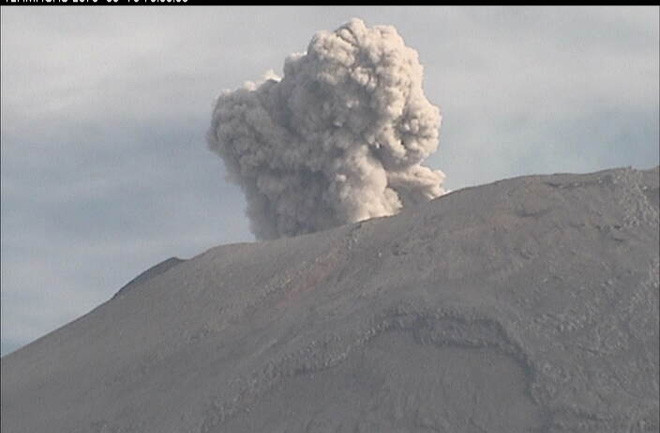 An explosion at Mexico's Popocatépetl taken from the Tlamacas webcam on May 15, 2013. Image: CENAPRED. The high alert at Mexico's Popocatépetl remains in place as the restless Mexican volcano still shows signs that new magma is at the surface, meaning a larger explosion could occur if pressures builds under the summit crater. Over the last day, the volcano has produced 22 separate explosions (see above) or "exhalations" of ash, as they are referred. The latest CENAPRED update from today (May 16) says that the explosive strombolian activity at the summit has continued, with blocks of volcanic tephra and ash being thrown up to 400 meters from the vent. Ash has been reported falling occasionally in cities all around the volcano as well. Combine that with near constant seismicity and ash emissions reaching up to 3.5 km (11,500 feet) that wax and wane, and we have a very active volcano. CENAPRED has left Popocatépetl at alert level Yellow Phase 3 and officials are making plans for evacuations and shelters if the eruption gets worse. The current 12 kilometer exclusion zone around the volcano also remains in place. Now, it wouldn't be a volcanic crisis without the usual "the locals don't care if the volcano is active" articles -- and sure enough, here it is. You can see the formula for these articles: a volcano is restless and officials are worry, but local residents near volcano X are plucky/fearless/dumb. Geologists say "danger" but local residents have something colorful to say about how they don't care, usually with a folksy attitude/idea of why it erupts. Now, I know there is a whole cottage industry in the media for these "people" stories, but I do wonder if they really sell the local communities short. Sure, stick a reporter's microphone in your face that everything is normal and you won't leave. Yes, there are very real issues with theft and looting during evacuations (as this article points out) -- something we've seen before at other volcanic crises. However, when it comes down to an actual large eruption, attitudes change quickly as your and your families' lives are threatened by the erupting volcano. Then again, we could be looking at fine journalism that uses public opinion to speculate on if a major eruption will occur (sigh) and whether folks think this is an actual emergency. Be sure to watch the Popocatépetl webcams set up by CENAPRED to see what the volcano is doing. They've added a new webcam to get a view of the activity and you can also seen an archive of photos and videos from the past few days from the webcams as well.