From Egypt to China, cat companions may have been an important fixture in the lives of many ancient peoples. 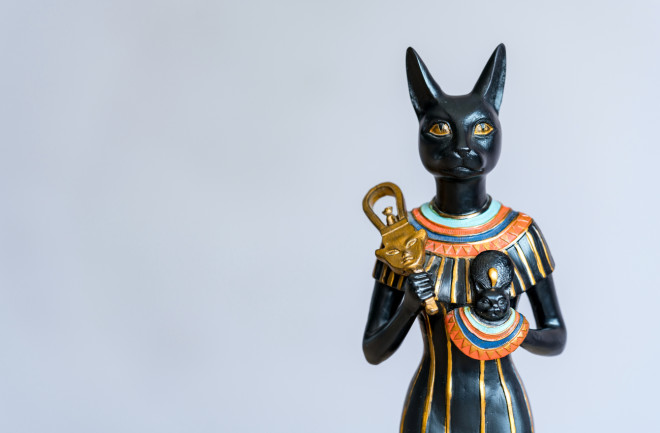 Cats have been alongside humans for most of the time we’ve lived in complex societies, but the exact chronology of their domestication is unclear.

One study found that cat domestication may have started as early as 12,000 years ago, while another more recent paper points to two different cat lineages that contributed to the domestic felines we have today, though both still likely came from the same species. One of these lineages likely began about 8,000 years ago in the Fertile Crescent; the other spread from Egypt into other Mediterranean countries about 3,500 years ago. And one ancient case of kitty kinship dates to roughly 9,500 years ago in Cyprus, where a human was buried with a cat — though it’s unclear whether the animal was wild or domesticated.

In any case, it seems that cats have spread through multiple ancient civilizations, often becoming an important fixture in the lives of the people there. In some cases, cats even took on symbolic religious and cultural importance. Not all cultures treated this domestic relationship equally, though.

Here are a few examples of the ways in which ancient peoples viewed their feline companions.

In Egypt, cats played an important role in the spiritual pantheon. Some Ancient Egyptians offered mummified cats and cat figurines to the feline goddess Bastet; many of them came from catteries — businesses that specialized in mummifying and selling various types of dead cats adorned in various ways — though it’s unclear how these mummies met their ends.

Read More: 8 Do’s and Don’ts for Communicating with Your Cat

Aside from what may or may not have happened in catteries, however, many felines lived a fairly comfortable life in Ancient Egypt. Much as today, the animals helped keep pests from homes (in life and in the afterlife, according to some interpretations of tomb art). Ancient Egyptians also believed cats brought good luck, thus honoring them with fancy accessories and a rich diet.

In Rome, cats weren’t always the first choice for pets — at least in the early days of the empire. In fact, many people instead had pet weasels or even snakes to keep rodents out of their house. But, according to a study in The Classical Journal, more owners began to utilize cats from the second through the fifth centuries. This was partly because Ancient Romans viewed felines as cleaner than weasels.

Even if cats weren’t always as appreciated as other pets (the Romans had a penitent for lap dogs, for example), cats still conquered one famous piece of ancient Roman history. Today, dozens of the tabbies reportedly live around the Largo di Torre Argentina in Rome, part of the ruins where Julius Caesar was murdered in 44 B.C.

Cats figure in some of the most important epics of the Hindu faith, including the Ramayana and the Mahābhārata. Even the 17th-century story “Puss in Boots,” written by Charles Perrault, may be derived from an Indian collection of fables dating back more than two millennia. As a pet, there isn’t much reference to cats in earlier Vedic literature — but in the period following the fifth century B.C., there is more mention of the felines as domestic companions.

Some of the earliest evidence of cats living alongside humans in China dates to 5,300 years ago. The authors of one study analyzed the archaeological and isotopic evidence of cats found on the farming site Quanhucun in the country’s northwest. The cat remains there seemingly reveal that the animals weren’t eating a strictly carnivorous diet (which would be expected for wild cats). In other words, the cats found there were likely situated early in the process of domestication, the authors say.

Read More: Free-Roaming Cats Could Be An Environmental Menace

The matter is far from settled, though. Other researchers don’t think this evidence is enough to say for sure. And other sources hold that domesticated cats in China actually came from Egyptian or European stock, perhaps only as recently as 2,000 years ago.