ESA Draws Up Plans to Bring Back a Sample From Mars

A sample return mission would require multiple launches and grabbing samples out of Mars’ orbit. 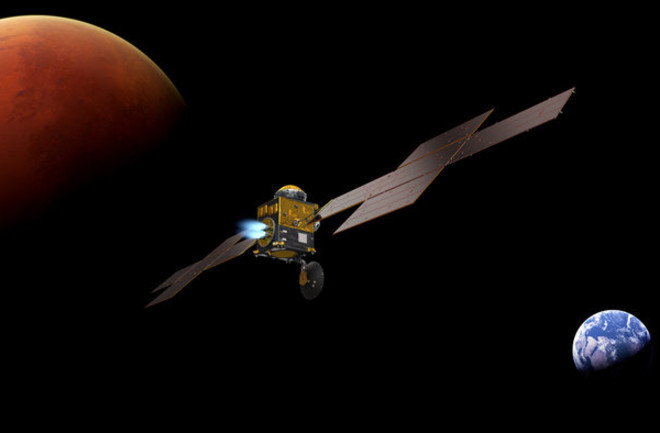 NASA isn’t the only space agency with a hunger for the Red Planet. The European Space Agency would also like to snatch samples from Mars, and now they’re making their own plans for a mission that will bring back priceless pieces of our neighboring planet.

ESA’s plans will certainly work in cooperation with NASA’s, and in fact NASA’s upcoming Mars 2020 mission, slated to launch next summer, would do the actual sample acquisition. But after that, both agency’s plans are still under construction. Sometime in the 2020s, the agencies hope to gather the bits of rock, dirt, and air that the Mars 2020 rover collects, and bring it all back to Earth to study up close.

NASA and ESA plan to work together in a multi-launch plan to return samples from the Red Planet. (Credit: ESA/K. Oldenburg)

ESA’s current proposal involves two more launches after Mars 2020. The first would be a small rover whose job is simply to drive around and pick up the samples Mars 2020 has already drilled, scraped, or otherwise captured and left behind at carefully marked depots. The ESA rover will collect them all into one container and load it onto a Mars Ascent Vehicle, delivered to Mars’ surface at the same time the lander arrived. That craft, the first to ever launch from the surface of Mars, will fly the samples into Mars Orbit.

A second launch would be for ESA’s Earth Return Orbiter, which would travel to Mars orbit to pick up the samples, and then fly them back to Earth for drop-off. While it sounds straightforward, the logistics and technical difficulty of two orbiters rendezvousing and docking around an alien world, then successfully flying home again to Earth, are challenging and would be an accomplishment all on their own – to say nothing of the priceless samples they will be carrying.

Once the craft returns its precious cargo to Earth, there are different concerns. A major driver of the interest in Mars is whether there was or, less likely, could still be life on the Red Planet. And whether or not microbial life is captured in the samples, understanding the chemistry those samples have undergone will be vital to understanding Mars’ present and past. All of that means that it is vital the samples aren’t contaminated with Earth life or even Earth chemistry, like the oxygen that suffuses our air, once they arrive back on terra firma.

NASA and ESA, as well as the international Council on Space Research (COSPAR) and Japan’s space agency (JAXA) all have committed to various forms of planetary protection. Because no one knows for sure whether Mars has or has had life, space agencies are committed to thorough decontamination processes when bringing back materials from other worlds. Until now, most of planetary protection has focused on protecting other worlds from Earth – making sure we decontaminate spacecraft before sending them off to crash on Mars, Venus, or Saturn. This will be one of the first times we have to protect Earth from other worlds.

But decontamination could damage some samples, since it might mean subjecting them to intense heat, chemicals, or radiation. So researchers are already considering what kinds of tests would need to be done in isolated chambers prior to sterilization. Additionally, the simple passage of time could affect some samples, such as those collected from Mars’ atmosphere, as the different substances can break each other down, even in isolation (our atmosphere and Mars’ are both constantly undergoing chemical changes). And of course, the act of examining some samples could destroy them, as certain tests require grinding rocks to dust, for instance. So the order of tests needs to be worked out in advance.

ESA will formalize their plans for a sample return mission this November at their next Ministerial Council, called Space19+. This is a meeting of ESA’s member states held every two to three years to hash out funding and proposals for the upcoming years.

NASA and ESA are both committed to the idea of a sample return mission. But even with the first stage, Mars 2020, lifting off next summer, there are still many details to be worked out for how to get the rover’s samples home.