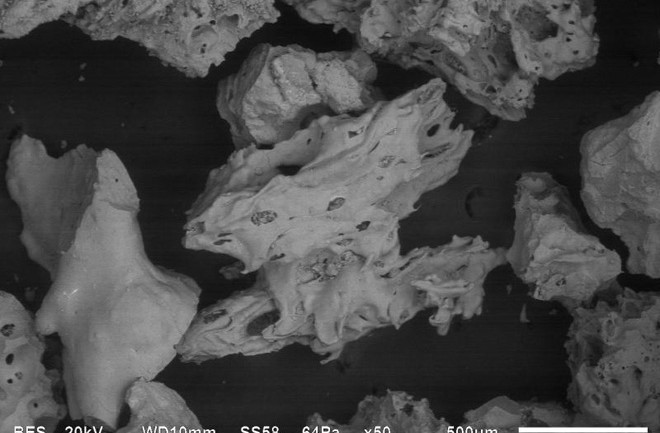 A scanning electron microscope image of ash from Veniaminof, showing the glass shards of juvenile (new) magma that erupted during the summer of 2013. Image: Kristi Wallace - USGS/AVO. I've returned from an excellent field trip to the Adirondacks of New York that included a stop at the lava lab at Syracuse University. Look for a post on that (with video) later this week. Some volcano news to start off another busy week: Indonesia The emergency order around Sinabung was lifted on Sunday, meaning evacuees can start returning to their homes in the area around the restless volcano. Over 10,000 people have been evacuated due to the explosions at Sinabung and 6,000 can return home now that the order was lifted. However, many people are returning to find that their crops were damaged by volcanic ash -- a common occurrence in farms areas near volcanoes. Meanwhile, activity at Lokon on Sulawesi has also declined recently, but the PVBMG will wait before lowering the alert status there from Level 3. AlaskaVeniaminof saw its alert status lowered as well, from Orange/Watch to Yellow/Advisory. There is still some minor seimicity under the caldera, but it does seem that the eruption may be waning or over. Much of the thermal anomaly detected by satellite looks to be cooling lava from that issued from the cinder cone with the caldera over the summer months. The Alaska Volcano Observatory has posted some great images of the the ash (see above) collected from the Veniaminof eruption, including some that show the glassy shards with blades of plagioclase (microlites) in the volcanic glass. Russia If you miss active lava flows now that things have settled down at Veniaminof, be sure to check out the image of Kliuchevskoi in Kamchatka, where an active lava flow was spotted earlier this month in Landsat 8 imagery. KVERT currently has three volcanoes on Orange Alert status (Kliuchevskoi, Shiveluch and Karymsky) and another four on Yellow Alert status (Gorely, Bezymianny, Tolbachik and Kizimen), so things are as busy as ever in far eastern Russia.