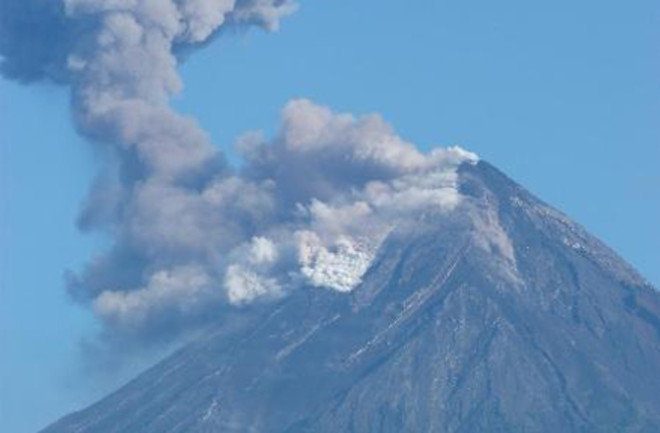 A small ash plume from Guatemala's Fuego seen on September 11, 2012. Image courtesy of INSIVUMEH. Volcano news from around the world for your reading enjoyment: Anak Krakatau One other volcano that made some headlines last week was Indonesia's Anak Krakatau. The latest activity was spreading ash over 80 km from the volcano in the Sunda Strait and this heightened activity has continued into this week. Lava flows and strombolian explosions with 2 km/ 6,500 foot plumes have been coming from the main crater of the volcano accompanied by constant seismicity. Now, typically the video we get from Anak Krakatau are the strombolian or vulcanian explosions that come from the main crater, but leave it to James Reynolds to capture an ocean entry of a lava flow from the Indonesian volcano. Fuego There isn't too much to add to the activity that occurred last week at Guatemala's Fuego that produced small pyroclastic flows, shockwaves that could be felt 10 km from the edifice and a 200 meter lava flow on the southern slopes of Fuego. The volcano continues to experience small to moderate explosions (see right), all part of the Strombolian activity that is typical for Fuego. The latest report from CONRED (with information from INSIVUMEH) in Guatemala says seismicity has increased this week after a short decrease following last week's activity. You can watch an updating picture of Fuego to see what is going on. Little Sitkin The elevated alert status for Little Sitkin in Alaska remains in place after what is now been over two weeks of heightened seismic activity. The latest report from the Alaska Volcano Observatory doesn't offer much more than that - mostly thanks to the fact that Little Sitkin has been shrouded in clouds for at least the past week. Little Sitkin, Cleveland and Iliamna all sit at Yellow Alert status across the Aleutian arc.