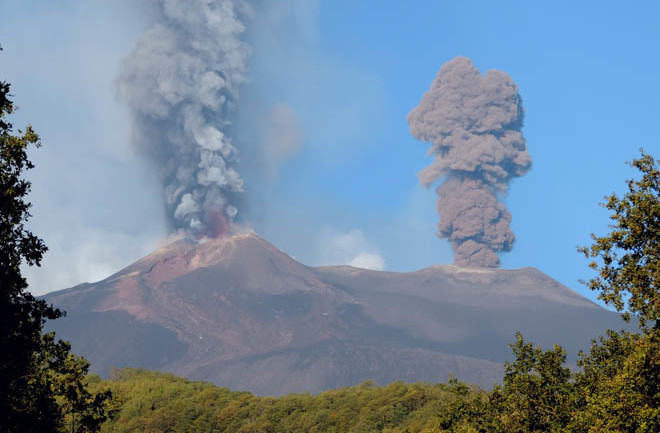 Etna in Italy erupting from two vents simultaneously on October 26, 2013. Image: Dr. Boris Behncke / Flickr. Sometimes it takes as many days as the meeting to catch back up afterwards -- which is clearly the case for me after GSA this year. Finally getting almost on track as we hurtle into November. Volcano news! Italy So, like clockwork, right as I leave for Denver and the GSA meeting, a volcano decides to put on a show. This time it was Etna. After six months of relative quiet, the Sicilian volcano put on quite an impressive show (see above), with eruptions from two craters simultaneously: the New Southeast Crater and the Northeast Crater (see above). Both of these eruptions were explosive, producing plumes that reached a few kilometers over the volcano and spread ash across the area of eastern Sicily. At the same time, a lava flow issued from the saddle between the two crater, meaning that Etna has erupting from at least three different vents simultaneously during the October 26 eruption. Dr. Boris Behncke of the Osservatorio Etneo posted an excellent video of the action during the 10/26 paroxysm that shows the lava fountaining that occurred from the New Southeast Crater. Towards the end of the video, you can see some great examples of strombolian activity during the waning stages of the eruption from the New Southeast Crater as giant bubbles pop in the conduit of the erupting vent. Each "pop" of that bubble would send out thousands of lava bombs, and created the booming sound you can hear on the video. Dr. Behncke also posted a great sequence of images and a story behind the remnants of a former volcano observatory on Etna. Right now, only the antenna of the former building sticks out above many years of volcanic debris, but the October 26 paroxysm lava flow came with 1 meter(!) of knocking down even that last vestige of the structure. Things have settled down at Etna after this eruption, but as we all know, the volcano can ramp up quickly to a new paroxysm. Indonesia Across the world in Indonesia, Sinabung continues to produce explosive eruptions. Right now, these discrete event have been producing ash plumes that reach up to 7 km (23,000 feet) over the volcano. All of this activity at Sinabung prompted the PVMBG to raise the alert status at the volcano to its second highest setting (siaga - alert). This move increased the exclusion zone around the volcano to 3 km and ~1,300 more people have evacuated the slopes of the restless volcano. Elsewhere in Indonesia, looks like people want to add some fearmongering to the menu (as if actively erupting volcanoes weren't enough). The IB Times has an article proclaiming "Lake Toba's Volcanic Underbelly 'Could Erupt at Any Time'", snatching a poor choice of words by the president of the Indonesia Geological Experts Association, Rovicky Dwi Putrohari. The article itself sounds like an attempt by the IGEA to promote its annual conference that occurred this week -- nothing like capitalizing on fear of the next eruption from a caldera to grab the media's attention.