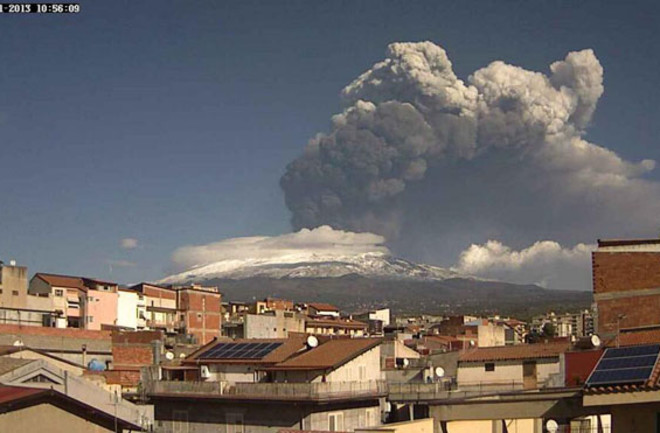 Webcam capture of the November 23, 2013 eruption of Etna in Italy. Image: @Culturevolcan / Twitter Quick post as I get ready for our Thanksgiving Week trip to the great white north (also known as Chicago): Indonesia The PVMBG has moved Sinabung up to its highest alert after a series of powerful explosions overnight reaching 2-8 km (6,500-25,000 feet). In the region around the volcano, over 12,000 people in over 17 villages have been evacuated due to the increasingly hazardous activity at the volcano. Right now, it seems like no one is quite sure what is going to come next -- all that we know is that activity has been on the increase over the last month. Although the ash from these explosions have cause some flight disruptions, it is not yet a threat to people living in the regional capitol, roughly 50 kilometers (31 miles) away. Italy Meanwhile in Italy, Etna had yet another paroxysm, this time less than a week since its last one. This one produced a significant ash plume with lava fountaining, but little-to-no lava flow activity. One of the more impressive videos I've seen for the eruption was one taken by hikers on Etna who had basaltic scoria rain down on them. VolcanoDiscovery also posted a time-lapse of yesterday's eruption.