Eruption Update for May 7, 2012: Popocatépetl, Iliamna, Lokon-Empung and a Pair of Japanese Volcanoes 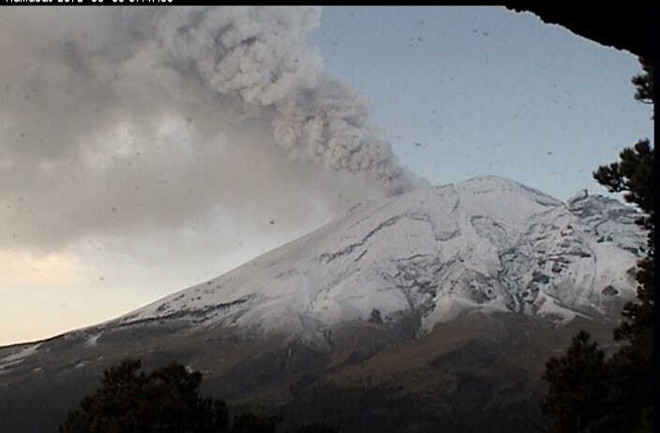 Quick updates on current activity at a number of volcanoes while I am mired in grading jail: Popocatépetl: The Mexican volcano is still churning away (see above). Thus far, most of the activity has been subplinian plumes from the crater area as the new magma rises and fragments, but Mexican officials are not taking any chances. They will be distributing almost half a million dust masks to people living near the volcano if/when a larger explosive eruption occurs that could drop significant ash across much of the area. You can see what is going on at Popocatépetl on the CENAPRED webcams for the volcano. Iliamna: We haven't heard much from Iliamna in the past month or so after the volcano was downgraded to Yellow Alert status by AVO after a period of increased seismicity and degassing. The seismicity was reported to be back on the upswing at the end of last week according to the Alaska Dispatch (who looks to be getting into the game of webicorder watching). However, this blip (if real) didn't cause AVO to change the status of Iliamna as the latest update just mentions seismicity at the volcano is "slightly above background". Iliamna has a webcam as well as a webicorder so you can follow along at home. Lokon-Empung: Another volcano that has been quite active is Lokon-Empung in Indonesia. The volcano had an explosive eruption earlier last week, producing a 2.5 km / 8,200 foot plume. Although evacuations have not been called yet, the National Disaster Mitigation Agency (BNPB) has begun to set up evacuation centers in case the activity increases. Seismicity has been increasing at Lokon-Empung since last week's eruption, but the alert status (Level III) is unchanged. Iwo Jima (Ioto): I haven't been able to find too much in the news about the activity at Japan's Iwo Jima (Ioto), however Eruptions reader Sherine did find some images of the activity at Iwo Jima, along with images of potential submarine activity at Fukutoku-Okanoba (see below or the top two rows of images on the previous link). As for descriptions, last week's Global Volcanism Program Weekly Volcanic Activity Report mentions that a new fumarole has opened at Iwo Jima as well.