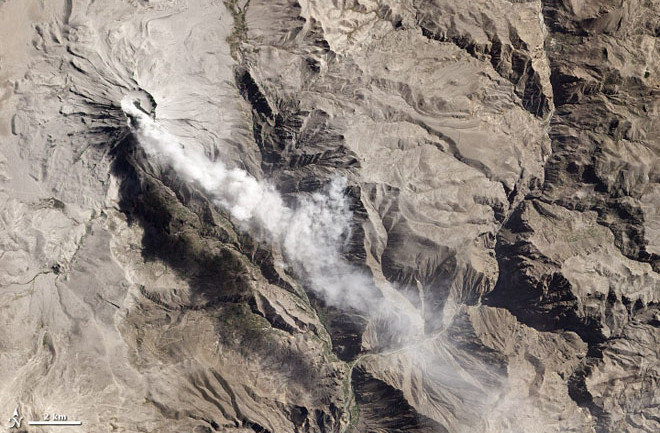 NASA EO-1 ALI image of a small steam-and-ash plume from Ubinas in Peru, seen on May 15, 2014. Image: NASA Earth Observatory. So, during my extended stay in grading jail, I didn't have a chance to write about a whole pile of interesting volcano news, so today's post is a bit of a clearinghouse on a whole bunch of volcano goodness. I'll be back on a more normal posting schedule now that classes have finally ended here and we head off into the summer. (You might notice a lack of information on the Santiaguito eruption from last week ... that's because I'm working on a longer post just about that activity for later this week.) Hawaii It appears that a new (old) volcano has been identified near Oahu in the Hawaiian Islands. The island chain is the product of a mantle plume, so each island is made of multiple volcanoes that erupt and coalesce into a landmass when they reach the surface. The island of Hawai'i is made of 5 volcanoes (LIST) and now it seems that Oahu has gained a third. Wai'anae and Ko'olau are the main two edifices that comprise the island, but a submarine volcano that has been dubbed Ka'ena is now thought to be the third edifice. Ka'ena likely hasn't been active for ~5 million years, so consider this to be a "fossil volcano" that gives us a richer history of the island chain. Washington The anniversary of the 1980 eruption of Mt. St. Helens just passed and with it, we had the release of some never-before-seen aerial images of that classic eruption. These were taken by a father and daughter who fell around the volcano while it was erupting and really capture that stunning vertical column feeding the Plinian cloud. There were also some great images of the volcano just prior to the eruption as well (although as of May 18, the image gallery looks be to not working). West Indies Robert Ballard, undersea explorer, is currently visiting Kick 'Em Jenny in the Western Antilles. Kick 'Em Jenny is an active submarine volcano that is part of the Western Indies arc that includes Soufriere Hills and Pelee. Like its neighbors, the volcano has produced some explosive eruptions, however, the media has latched onto the idea that Kick 'Em Jenny could be a threat to the US mainland by generating a tsunami. That claim appears to be severely overblown, so chalk that claim up to good, old fashioned fear mongering. The last known eruption of Kick 'Em Jenny was in 2001 and most eruptions over the last century have been VEI 1 or lower event. RussiaOver on Volkstat.ru, you can check out some great images of the current eruptions ongoing at Shiveluch in Russia (thanks to Ben Edwards for the link). Shiveluch is as active as ever and it looks like the dome within the main crater continues to produce explosive eruption. Peru Not to be forgotten, but Ubinas in Peru is still producing a small ash plume during its continued unrest (see NASA Earth Observatory image, above). The activity has waned some at the volcano, but the ash from these explosions is still having an effect on the agriculture around Ubinas. Recently, two more villages and over 2,000 llamas and alpacas were evacuated from the region as well.