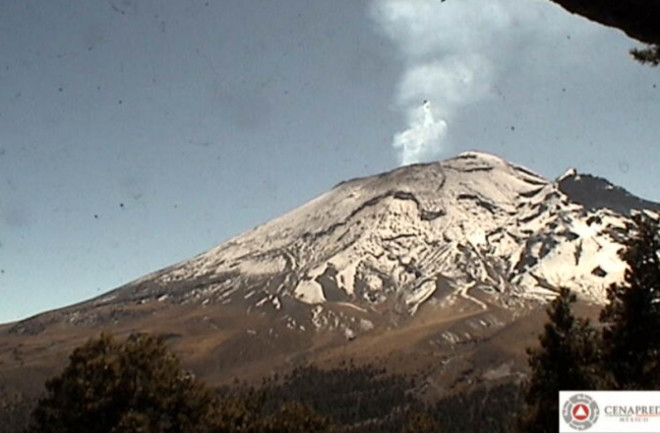 A webcam shot of Mexico's Popocatepetl on January 7, 2015. Ash from recent explosions coats the snow on the volcano's upper slopes. Source: CENAPRED webcam. First update on volcanic eruptions for the new year! Cape Verde Islands It appears that the eruption at Fogo (runner-up in the 2014 Pliny voting) might be changing its character - at least in the short term. Reports from the Cape Verde Islands say that the eruption has become increasing ash-rich and lava flows have ceased. The eruption has been going on for a month now, but this marks the first time that the eruption has been explosive rather than dominantly effusive (lava flows). This might suggest more gas in the magma erupting or new interaction with water in the conduit (or even the end of the eruption), but the source of this change is not clear . The humanitarian effort for the people displaced by this eruption is ongoing as well. Mexico Over the weekend and into this week, two Mexican volcanoes have been increasingly active. Popocatépetl produced a number of explosions as lava reaches the surface at the active vent, as evidenced by incandescence spotted at the volcano's summit. Mexican officials don't see this behavior at Popocatépetl changing if new lava continues to erupt. Most of the explosions produced ash-rich plumes that reached hundreds of meters over the volcano, although some of the larger explosions reached over 1.5 km. You can watch the activity on one of the Popocatépetl webcams. Meanwhile, Colima joined the fray, producing its own explosions over the weekend, with ash plumes reaching over 3 km (almost 10,000 feet) over the volcano. Some officials are saying that there is a heightened danger of a large explosive eruption from Colima because it has been over 100 years since that last large eruption, but such patterns are questionable at best when it comes to volcanic activity. Nevertheless, the heightened explosive activity at Colima has prompted preparations for evacuations if the restlessness continues or increases. Other news