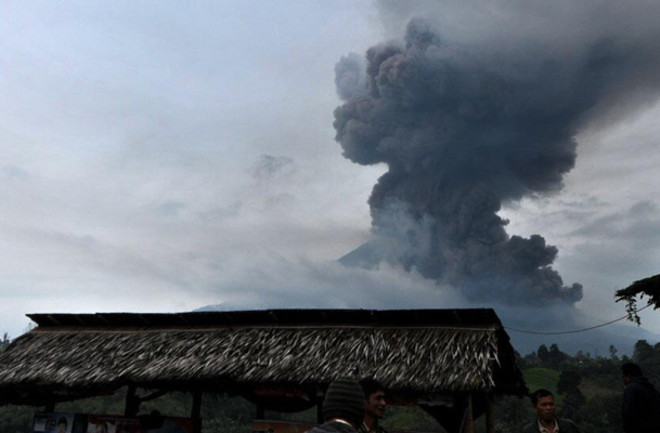 Sinabung in Indonesia seen erupting on January 3, 2014. Image: @hilmifaiq Our first update in the new year! Indonesia Explosions continue at Sinabung (see above) where a new dome was spotted at the summit of the restless volcano. Any time a dome is seen at a volcano like Sinabung, the threat of a repeated cycle of dome collapse, explosive eruption and pyroclastic flows is very real and this is what is being observed at Sinabung over the past few days. The lava dome has been estimated to be ~2.5 million cubic meters (0.0025 cubic km) -- and although it seems to be garbled in translations, the biggest fear are these pyroclastic flows from any collapse of the dome. Unfortunately, 11 people have died so far since Sinabung began to erupt again, but not from volcanic causes. Instead, evacuees have died from diseases contracted in the refugee camps that have struggled to deal with the over 20,000 people who have had to leave their homes. Alaska After letting Pavlof and Veniaminof get most of the headlines in 2013, Cleveland has reminded us that it remains a persistent threat for explosive activity in the Aleutian arc. The Alaska Volcano Observatory raised the aviation threat level for the volcano to orange/watch from yellow/advisory after a series of explosions occurred at Cleveland from December 30 to January 2. None of the explosions were very large, but the history at Cleveland suggests that these smaller eruptions could be leading to a larger one if a new dome is forming at the summit of the volcano.