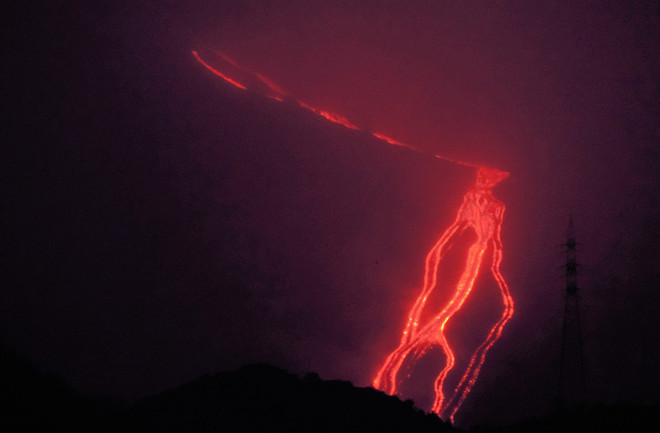 Lava flows from Etna, seen on January 26, 2014. Image: Dr. Boris Behncke / Flickr. Time for some updates on volcanic activity worldwide: Italy Starting late last week, Etna began yet another paroxysm of eruptive activity, but this time instead of mainly explosive behavior, the eruption has produced a lava flow that has been snaking down the slopes of the volcano (see above). This lava flow from the New Southeast Crater has sent lava down the southeast flank of Etna in the Valle del Bove for the last 3 days. The explosive component of the eruption has been much milder (so far) compared to the giant lava fountains that were the hallmark of many of the paroxysms last year. The AP has some nice video footage of the lava flows showing the flow levees and the braided network of flows that make up the flow field itself. UPDATE: The NASA Earth Observatory posted a great image of Etna just prior to this new activity as well. Indonesia In what is beginning to sound like a broken record, the eruption at Sinabung continues unabated. Time-lapse video of the volcano shows the pattern of dome collapses and pyroclastic flows that has become the norm at Sinabung. Probably the one of the best view I've seen of one of these pyroclastic flows (at least from a distance) is this video by Photovolcanica that shows the glowing base of the pyroclastic flow, made up of crumbled blocks of the hot lava dome, and the buoyant ash cloud associated with the pyroclastic flow itself. This activity at Sinabung is another example of how the volcanism of Indonesia can quickly have a profound effect on the people living near the volcano -- and evacuations near Sinabung have now topped 30,000 people, quite a challenge for any government to handle. The eruption might also have an impact on some precarious animal life in the region as well.