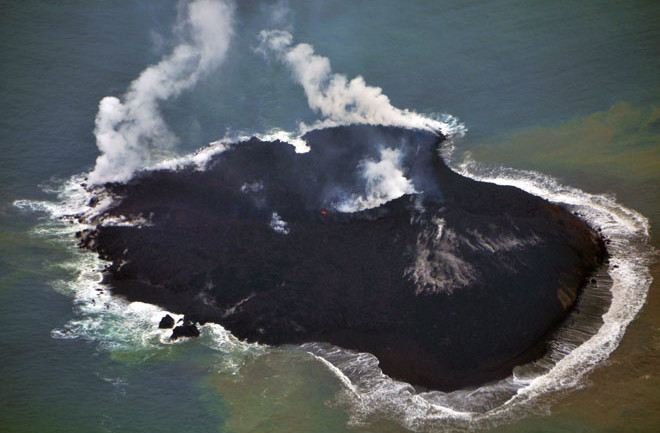 The new island forming during an eruption of Nishinoshima. Active lava flows are visible glowing orange in this image, taken December 1, 2013. Image: Japan Coast Guard. The Thanksgiving Break got the best of me (well, I needed the time off), but the start of December packs a wallop. The big (and I mean big) American Geophysical Union Fall Meeting starts in San Francisco in a week. I'll be attending the meeting and giving a talk on my work at the Lassen Volcanic Center in California -- I'll post about that later this week. In the meantime, I have a few updates on activity around the globe from the last week: Italy Etna had yet another paroxysm last week, but this one was lost somewhat to poor weather. However, so good images of the strombolian explosions from the new Southeast Crater were captured by Volcano Discovery. I did run across an interesting article about how these latest eruptions from Etna have been visible from Malta, almost 200 kilometers away. Also, if you want to know a lot more about the new Southeast Crater, our own Dr. Boris Behncke and colleagues just had a new paper on fast-growing cone published in the Journal of Volcanology and Geothermal Research. Japan Nishinoshima eruption (see above) continues in the Pacific with the island beginning to look like it's really going to make it. Some new video taken of the eruption shows a central crater and some small lava flows radiating to the edges of the cone. According to the Japan News, the latest measurements of the new island put it at around 40,000 square meters, so it has been growing at a very healthy rate of the last week. Indonesia Some sad news from Sinabung over the weekend: a landslide near the volcano killed at least 9 people. The report from the Jakarta Post is unclear whether the landslide was made of newly deposited volcanic material, but likely it was not -- instead, this is just what happens in volcanic terranes with abundant rainfall. Volcanoes are inherently unstable edifices, so heavy precipitation can destabilize slopes and generate landslides unrelated to any current volcanic activity. So, this looks to be just a coincidence rather than related to any ongoing eruptive activity. The current eruption has damaged over 260 square kilometers of cropland. Over 17,000 people have been evacuated and the conditions of the 31 refugee camps are not looking good right now. Meanwhile, Merapi also had a number of small phreatic explosions as well. These could be related to a reviving volcano or the abundant rains percolating into the heated rocks of the volcano.