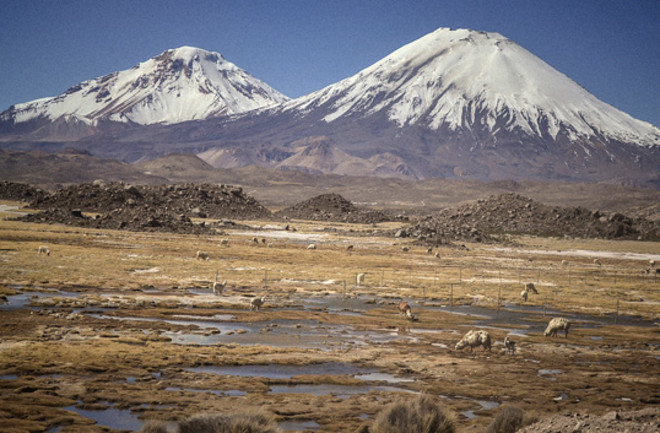 Parinacota (right) and Pomerape (left), part of the Nevados de Payachata in northern Chile, seen in 2011. Since the April 1 M8.2 earthquake, 3 small temblors have been felt at Parinacota, but likely not related to potential eruptions. Image: Yann Duarte / Flickr Let's wrap up the week with some volcano news: PerúVillages around Ubinas had to be evacuated after explosions rocked the volcano -- combined with the elevated seismicity, all signs that the volcano may have larger eruptions in the works. However, it seems like a lack of response from Peruvian authorities have hampered the evacuation. The latest report (from before the most recent explosions) from the IGP says that Ubinas has had persistent fumarolic activity with ash emissions for over a month now, tens to hundreds of long-period and hybrid earthquakes (associated with magma movement) and most tellingly, observations of the crater in early March (and since) have shown a slug of lava in the crater, producing a lava flow/dome of at least 150 meters in size. All in all, it seems that Ubinas might be headed to more explosive eruptions if the lava starts to block the ability of the magma from degassing. When the skies are clearer, you can glimpse Ubinas in this webcam. Chile Since the M8.2 earthquake (and its accompanying aftershocks) earlier this week off the coast of Chile near Iqueque, the SERNAGEOMIN has been watching how these temblors affected the volcanoes closest to the epicenter. There are a number of active volcanoes within a few hundred kilometers of that epicenter, including Parinacota, Isluga, Ollagüe, Irruptuncu y Olca, San Pedro, Lascar (and my Ph.D. volcano, Aucanquilcha). Parinacota is still on green alert status even thought three small earthquakes were recorded near the volcano, which is thought to have last erupted over 1700 years ago. For the rest of the bunch, the SERNAGEOMIN has not noted any changes, at least so far. Remember, there is some evidence that large earthquakes can trigger volcanoes to erupt in Chile, but it doesn't seem to happen after every very large earthquakes as nothing clearly followed the 2010 earthquake that occurred further south down the coast. Lies and fearmongering This week was packed full of people trying to scare each other. Luckily, these internet rumors are easily debunked: No, animals are not fleeing Yellowstone because an eruption is about to occur. There isn't even evidence that the video showing buffalo running (as they wont, sometimes) has the animals running away or towards the caldera! If you need a reminder of why not to believe this nonsense, read my primer on not falling for "Yellowstone is about to erupt" fearmongering (and remember, trust geologists, not animals). We also had a spate of earthquakes that captured a lot of the media's attention, leading to the usual worry that we're having more earthquakes. Sorry, again, no dice. I wrote a piece for the Daily Beast putting that notion to rest.