Eruption May Have Started at Copahue on the Chile/Argentina Border 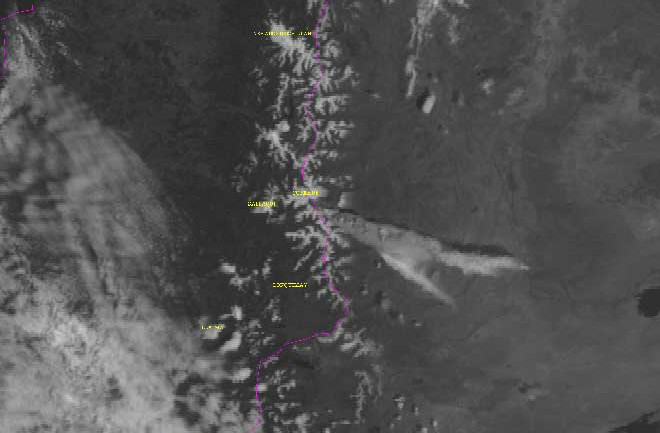 A potential eruption plume from Copahue on the Chile/Argentina border, spreading off to the ESE, spotted by GOES-East. Image: NOAA. Quick post, but I said if something interesting happened... I was sent a GOES image showing a fairly strong plume from Copahue on the Chile/Argentina border - a plume that sure looks like an eruption from the volcano. Sure enough, reports out of Chile and Argentina show that the volcano is producing a pretty impressive plume. Sounds like geologists will conduct a flyover to see what is going on sometime today. I'll try to dig up more information as I can find it, but feel free to add any info here as well, but there wasn't much on yesterday's Terra pass. UPDATES: Supposedly this is a shot of the plume seen from close to the volcano. I can't confirm its authenticity. Also, not surprisingly, the volcano has been moved up to Orange Alert. Ash is also apparently falling 50 km from the volcano. According to a tweet from John Seach based on VAAC information, the plume might be as tall as 9.5 km / 31,000 feet. Copahue last had an eruption in 2000 and has a history of VEI 2+ explosive eruptions.