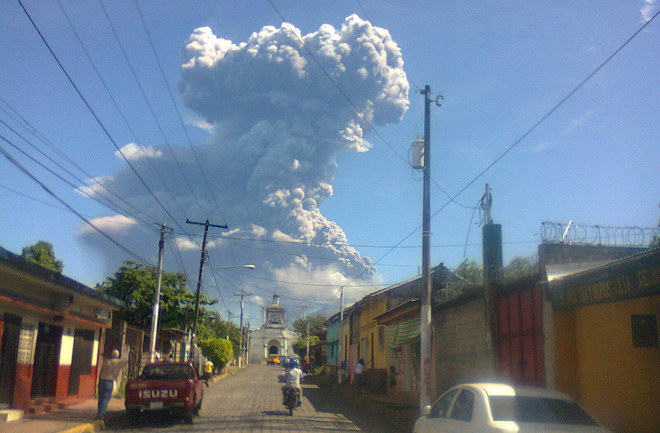 The eruptive plume from San Cristobal, seen on September 7, 2012. Image courtesy of Ricci Rich Silva. I'm back from the Geological Society of America Field Forum in the Sierras and it looks like I have a lot of catching up to do. I'll have a post later this week with some highlights from the forum along with some attempts to dispel some rumors about Fuji. However, the biggest volcanic activity (at least in terms of news coverage) is the eruption at Nicaragua's San Cristobal. The restless Central American volcano is frequently active, with VEI 1-2 eruptions almost annually for the past decade, many of which require the evacuation of people living on the slopes of San Cristobal. This eruption is no different, with a small-to-moderate ash plume* that reached ~5 km / 16,400 feet**, dropping ash on the surrounding countryside, as far as 50 km. Since the start of the eruption late last week, over 3,000 people have been evacuated from near the volcano, but the over the weekend, the activity has waned some. You can see a nice collection of images and videos of the eruption here. I've seen a lot of speculation about the relationship between the M7.6 Costa Rican earthquake on September 5 and this eruption of San Cristobal. Now, we don't have any evidence that the earthquake could have directly triggered the eruption, however, the correlation is interesting. It might be difficult to prove that the earthquake lead to the eruption, however, considering now consistently active San Cristobal can be. Is it really "triggering" an eruption when the volcano is primed to erupt soon anyway? There have also been a small swarm of earthquakes near Lake Managua in Nicaragua over the past week that again, may or may not have any direct relationship with the Costa Rican earthquake. They are all part of the same subduction zone, but these causation relationships can be difficult to prove scientifically. * Why is it that the media almost always says volcanoes "spew" ash? I mean, there must be a better word or is it just easy to parrot what the other folks are writing? ** San Cristobal has been active for much longer than 1520 - probably tens of thousands of years.. It seems that the media can confuse "historical eruptions" with all the eruptive record of a volcano.