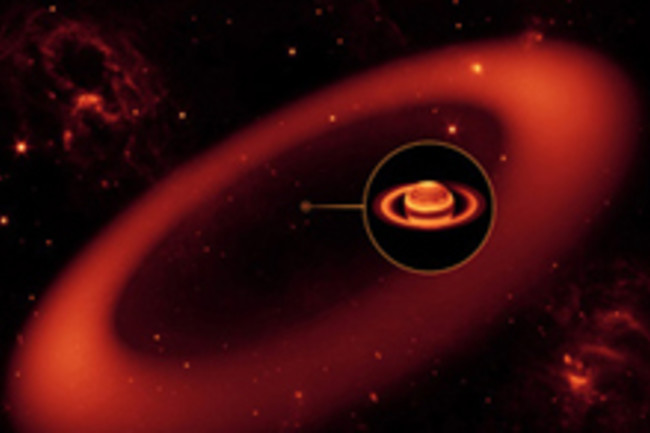 Astronomers have found an enormous and diffuse new ring of Saturn that lies far, far beyond the rest of the planet's famous circlets. Researchers say the new ring is comprised of debris ejected from Saturn's outlying moon Phoebe during impact. The new discovery also solves a puzzle regarding

the curious two-faced appearance of Saturn's moon Iapetus, whose leading hemisphere is much darker than its trailing side [New Scientist].

The ring, which has claimed the title of largest known ring in the solar system, starts about 3.7 million miles from Saturn and extends outward another 7.4 million miles.

Its diameter is equivalent to 300 Saturns lined up side to side. And its entire volume can hold one billion Earths.... "This is one supersized ring" [CNN]

, says Anne Verbiscer, coauthor of the study published in Nature. The ring has the same orbital tilt as the moon Phoebe--both are tilted at a 27 degree angle from Saturn's main ring plane--which supports the theory that Phoebe's ejected dust feeds the ring.

, says Verbiscer. Studies of the darker material on Iapetus have shown that its composition is similar to that of Phoebe's surface. There's a good reason why the ring has never been noticed before: Although it is huge, researchers say that its sparse distribution of particles causes the ring to reflect very little light, rendering it practically invisible. Verbiscer explains: 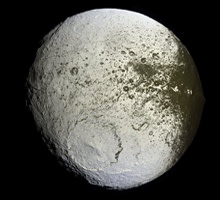 The discovery would appear to resolve a longstanding mystery in planetary science: why the walnut-shaped Iapetus has a two-tone complexion, with one side of the moon significantly darker than the other. "It has essentially a head-on collision. The particles smack Iapetus like bugs on a windshield" [BBC News]

"The particles are very, very tiny, so the ring is very, very tenuous; and actually if you were standing in the ring itself, you wouldn't even know it.... In a cubic km of space, there are all of 10-20 particles" [BBC News].

The SciencesThe 2019 South American Eclipse, as Captured By Those on the Ground
Recommendations From Our Store