On November 21, 2009, the Cassini spacecraft sliced past Saturn's moon Enceladus, shaving the iceball at a distance of 1600 km (1000 miles). From that distance, the view was astonishing... 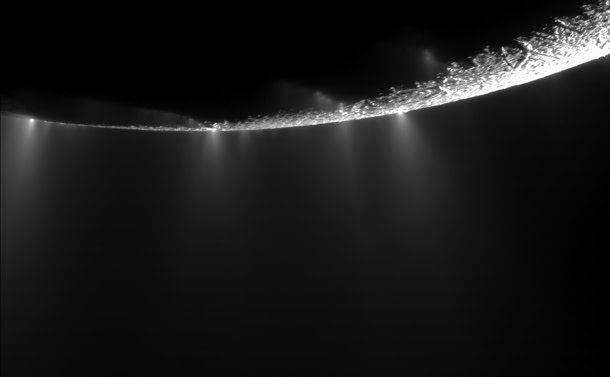 It's been known for some time that the south pole of Enceladus is lousy with geysers, erupting water into space (though the ultimate source of the water is still a bit of a mystery). But this new pass shows 30 geysers, 20 more than were previously seen! One major geyser also appears to have waned a bit since the last pass, showing that not only is stuff going on, but things are changing, too. 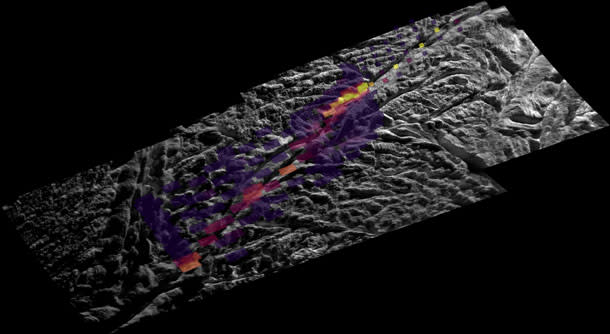 This mosaic of the surface of Enceladus overlays a high-res optical image with thermal hot-spots. You can see that the hottest parts -- which are actually at -90° C (-140° F), so I guess "hot" is in the (frozen) eye of the beholder -- line up along a huge fracture in the moon's surface. The fracture is called Baghdad Sulcus and is one of the places on the moon erupting water geysers. The fracture is about 500 meters (roughly 1/4 mile) deep, and this image shows about a 40 km (25 mile) swath along it. There's evidence of particles from the geysers re-falling here, and also house-sized icy blocks that may be rubble that has been seismically shaken and settled downslope. There's a lot of science in those images, and in the others returned from that close pass. But I think my favorite from these is one that may also have scientific value, but, like almost everything Cassini sends back, is perhaps more striking for its artistry. 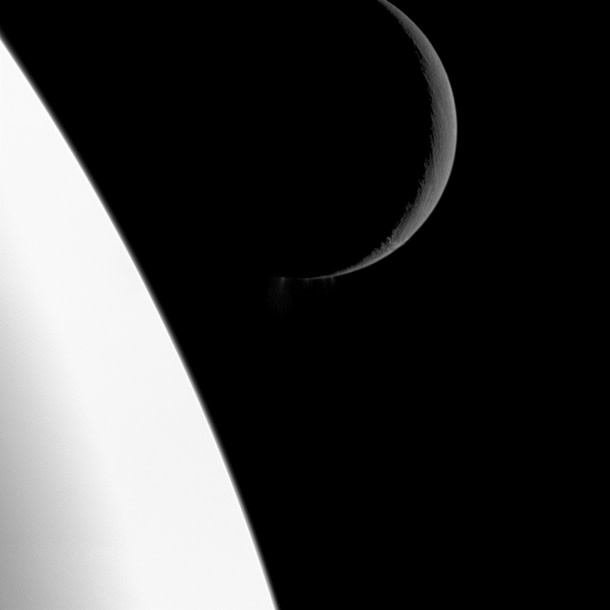 That's a crescent Enceladus, replete with geysers, and its parent planet Saturn in the foreground. Wow, that's pretty. I love how gray Enceladus looks and how much brighter Saturn is. I was thrown for a moment; Enceladus has a reflectivity of nearly 100%, meaning it reflects nearly all the light hitting it, while Saturn only reflects 30-50% of the light that hits it (depending on how you measure it). But this depends on the viewing geometry! Enceladus is thin crescent, so the light is hitting it at a very low angle. A lot of the light hitting the moon is sent straight back toward the source (the Sun), so not much of that light gets sent off in other directions. It's not that Enceladus is intrinsically fainter than Saturn, it's just that the light is reflected off in another direction, and not towards Cassini in this image. As in life, sometimes what you see depends on how you look. Cassini has been orbiting Saturn since 2004, and in all that time it has not disappointed. It continues to return a veritable bounty of information about Saturn and its fleet of moons. If you want to stay on top of Cassini news, subscribe to the email list, and follow imaging team leader Carolyn Porco on Twitter!