Enceladus does and does not have a global ocean

In 2005, the Cassini space probe orbiting Saturn surprised astronomers when it detected geysers of water spewing from the icy moon Enceladus. This week, in a University of Colorado study of the geysers spewing from Enceladus, astronomers found the water lacked sodium. They observed it using the 10 meter Keck and 4 meter Anglo Australian ground-based telescopes, and detected very little if any sodium in the geysers. If the plumes originated from an undersurface ocean then they are expected to have sodium in them. Instead, given the unsalty nature of the geysers, they surmise there may be pockets of liquid water under the surface which evaporates into space, or it could be from crustal plates of surface ice rubbing against each other. 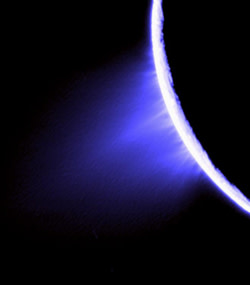 [rewind noises] In 2005, the Cassini space probe orbiting Saturn surprised astronomers when it detected geysers of water spewing from the icy moon Enceladus. This week, in a JPL and Max Planck Institute for Nuclear Physics study of the outermost ring of Saturn, astronomers found the ring particles contained sodium. They observed it using the Cassini spacecraft, and detected sodium salts in the rings. This ring is known to be replenished by Enceladus's geysers. If the plumes originated from an undersurface ocean then they are expected to have sodium in them. Given the salty nature of the rings, they surmise there must be a global ocean under the surface which shoots water into space where it replenished that ring.

Uh, say what? Which is it? Beats me. I'm a violent star-explodey kind of guy, not an exooceanologist. I imagine the authors of the two papers have their opinions on both studies, and I'd love to hear what they have to say. I'd also like to see the spectra obtained by the no-salt-in-the-plumes team first (because a non-detection of something is always on shakier ground than a positive detection of something) before I would come to any conclusions. But thus is science. Two observations, two good teams, two very different conclusions. That's what it's like on the cutting edge... and we'll need more observations to cut through all this. Happily, as Cassini orbits the Saturn system it will be passing directly through the plumes at least twice more, giving astronomers that many more chances to see what's happening on that tiny little moon so far away. Image: NASA/Cassini

Planet EarthCan Animals Be Right- or Left-Pawed?
Recommendations From Our Store