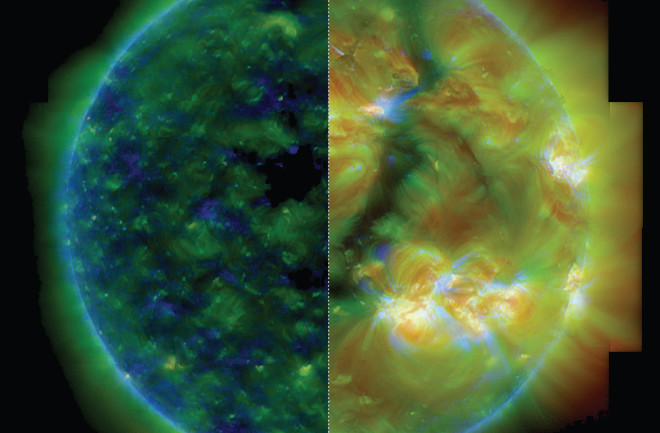 A comparison of the Sun as seen by the Hinode satellite during minimum and maximum parts of the Sun's 11-year cycle. (Source: NASA Marshall Space Flight Center) Here at ImaGeo, I love posting big, beautiful images of the Sun in all its fiery glory. So when I saw the composite of two images above, there was just no way I could resist — and not just because the colors and patterns are so dang pretty. The before and after composite reveals something I've never seen demonstrated so dramatically before: the Sun's split personality. (And by the way, make sure to click on it, and then click again to zoom in close.) The Sun as seen on the left is showing its relatively cool, calm and collected personality, which takes hold during the low point in its 11-year cycle. In this image, you're seeing the Sun as it looked about 10 years ago. The Sun as seen on the right is betraying its much more hot-tempered side, during its recent peak in the activity cycle. Before I saw this composite, I never fully appreciated just how big a transformation the Sun makes over the course of just 11 years. The Hinode satellite's Extreme ultraviolet Imaging Spectrometer captured the images that go into these before and after views. The false-color scheme depicts material at different temperatures in the Sun's atmosphere, called the corona, with temperatures increasing from blue to red. When the Sun is at 'solar max,' its atmosphere fills with very hot material above bright active regions. Hinode's EIS instrument shows where that material comes from and where it is going. During the peak of the cycle, the Sun's magnetic field lines tend to become tangled and stretched, yielding a frenzy of activity. This includes numerous solar flares that suddenly release blasts of energy equivalent to millions of hydrogen bombs, as well as gargantuan explosions that blast billions of tons of solar particles into space at millions miles per hour. But then the magnetic field lines begin snapping back into simpler alignments, and the Sun settles down. That's what's happening now, as the Sun comes down off its cyclical peak.

The waxing and waning of sunspot numbers on the Sun between 1995 and August, 2016, plus the prediction out to 2020. The Sun tends to be more active when sunspot numbers are high. (Source: NASA) As the graphic above shows, that peak was reached in 2014. (Although there was actually a double peak, with an earlier, smaller one in 2012.) The Sun is now sliding toward its much calmer phase. But aurora watchers, don't despair! The Sun may be heading toward the minimum part of its cycle. But that doesn't mean the Sun will no longer throw off the particles and energy that jostle Earth's magnetic bubble — the match that ignites those beautiful curtains of multicolored fire in the sky. In fact, even as I'm writing this on Friday, Sept. 30, the aurora forecast for tonight is for highly active displays visible overhead (weather permitting) as far south as Vancouver, Minneapolis, Milwaukee, and Toronto. Northern lights may even be visible low on the horizon as far south as Indianapolis and Annapolis. (For the latest aurora forecasts, go here.) Meanwhile, managers of electrical grids, satellites, and other equipment that can be seriously harmed by the geomagnetic storms touched off by solar activity would be justified in feeling just a tad uneasy right now. That's because the largest geomagnetic storms tend to occur after solar maximum, "so we are in the most dangerous period right now," says Tamas Gombosi, an engineer at the University of Michigan. Gombosi helped pioneer a system for forecasting the regional effects of solar storms. It is being launched tomorrow.