Ecuador's Volcano Rumbles, But Locals May Not Evacuate 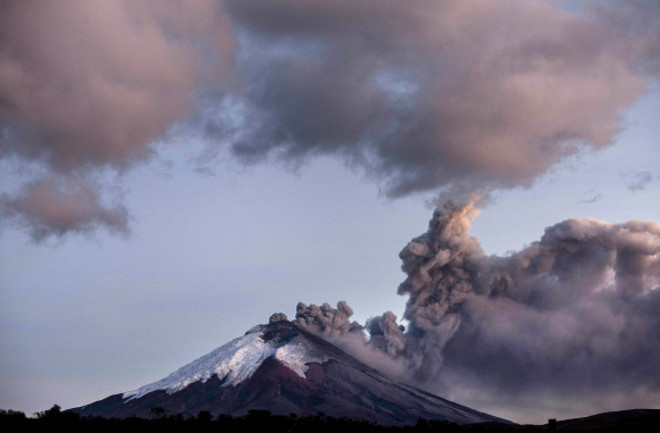 Cotopaxi Volcano seen from Loreto del Pedregal, Ecuador, 06 September 2015. EPA/JOSE JACOME/Almay The start of the semester is always busy around here, and this year is no difference. Here's some volcano-related news that caught my eye recently: Ecuador The unrest at Cotopaxi continues and this is problematic for disaster mitigation around the volcano. The longer the volcano merely puffs out ash and steam, the more people become complacent and resistant to orders for evacuation if the activity becomes more intense. Additionally, the longer this unrest continues, the more the local economy around Cotopaxi is impacted, especially the tourist business. The area around Cotopaxi still remains at Yellow alert status due to the rumblings at the volcano, although some of the harmonic tremor associated with magma movement has decreased over the past 24 hours. Members of the USGS Volcanic Disaster Assistance Program were in Ecuador this week as well stressing the importance of monitoring and vigilance to avoid catastrophe---and the drills held in Salcedo are an excellent example of how to maintain readiness. IG-EPN still has a multitude of webcams pointed at Cotopaxi.

The ash plume from Ecuador's Cotopaxi on September 9, 2015. Terra/MODIS image. NASAJupiter A recent study implicates abundant eruptible magma under the surface on Io for the multitude of misplaced volcanoes on the moon of Jupiter. New models of how the gravitational forces from Jupiter effect one of its closest moons suggest that the constant motion of molten rock can add more heat, creating even more magma. This is somewhat akin to the thermal erosion we see in lava tubes and flows on Earth, where the floor of a lava tube is "eaten away" by the flowing lava. The tidal forces working on Io both effect the solid material of the moon and this mix of magma and crystals that sit under the surface according to the study published in

One note: A lot of the coverage of this study refer to "lava ocean." Based on the descriptions I've read, this isn't correct. The authors of the study even say "

the ocean layer is likely a partially molten slurry or matrix with a mix of molten and solid rock" so it much more like a crystal mush than a vat of totally liquid magma. I think the use of the word "ocean" didn't do the study any favors.