Earthquake at Yellowstone Caldera is No Need for Concern 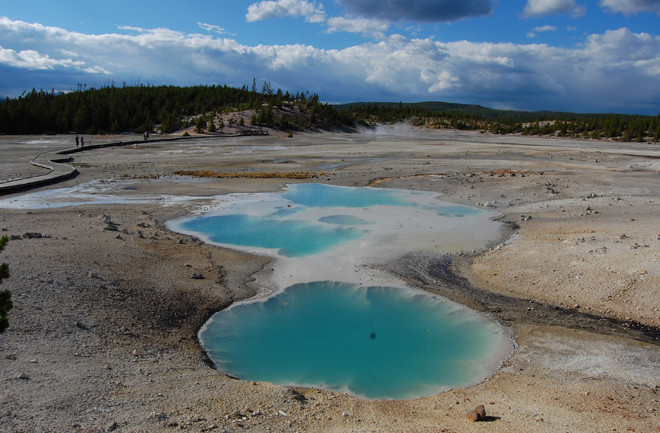 Norris Geyser Basin in Yellowstone National Park. Image: Erik Klemetti Over the weekend, the Yellowstone National Park felt its strongest earthquake since 1980 -- a M4.7 event located just north of the Norris Geyser Basin at a depth of ~7 km. As you can guess, with such an earthquake, the Yellowstone-fearing throngs got a little nervous. However, this earthquake is nothing out of the ordinary for Yellowstone, even if it is larger than your average seismic event in or near the caldera. Over the past few hundred years, the caldera has felt numerous large earthquakes, including a M7.3 earthquake in 1959 ... and none of them have led to an eruption at Yellowstone (even a small one). In fact, if you really want to be worried about hazards from Yellowstones, earthquakes might be the bigger danger. Now, why might that be? Well, some of it has to do with whether Yellowstone has much eruptible magma beneath the surface. Most suggestions, both looking at Yellowstone through a seismic or petrologic lens, suggests that no, the caldera doesn't have a huge volume of magma that is in a state that can easily erupt. In fact, some research suggests that Yellowstone is bordering on moribund -- that is, it might be a "dying" caldera. Now, I'm not really ready to carve the caldera's tombstone, but most research about large earthquakes triggering volcanic eruptions suggest that you likely need a volcano that is ready to erupt (i.e., lots of eruptible, gas-charged magma sitting below the surface) and is just looking for a trigger. That really doesn't describe Yellowstone. Sunday's earthquake did not have the right focal mechanism to be directly related to magma moving below the surface either. You would expect if an earthquake was being caused by magma working its way upwards and making room for itself in the crust that any earthquake that were to occur would be one caused by extension. However, the recent M4.7 earthquake had a focal mechanism that suggests it was mainly reverse (compressional) with a smidge of strike-slip (side-by-side) motion -- not what you would expect for magma moving upwards leading to an eruption. The area that the earthquake occurred is a region of uplift in the caldera and exactly why this uplift is occurring is still being researched. This uplift is occurring in one of the most hydrothermally-active areas in/around the caldera, so maybe some of the uplift could be related to changes in the hydrothermal system rather than anything magmatic. There is some research that suggests that the uplift is related to a small sill of magma being emplaced at depth under the region -- and this sort of event should be expected to be common at a caldera. Petrologically speaking, we see that the exposed innards of volcanoes -- plutons and batholiths -- are constructed incrementally by lots of small intrusions of magma. This means that we might expect small intrusions to be common at Yellowstone. More importantly, most of these intrusions likely don't produce any eruption (possibly because they don't add enough heat to the system to generate sufficient eruptible magma), so uplift and earthquakes related to intrusions of magma at depth as the roots of the magmatic system grows should be expect at any active caldera. This is the "breathing" that people like to discuss at Yellowstone: cycles of inflation and deflation over years to decades. This doesn't mean that USGS geologists aren't checking out what effects the earthquake might have had on the region -- maybe there was some surface motion or maybe the hydrothermal system at Norris Geyser Basin has changed. However, there are no indications that any eruption is on the way at Yellowstone after this weekend's earthquake.