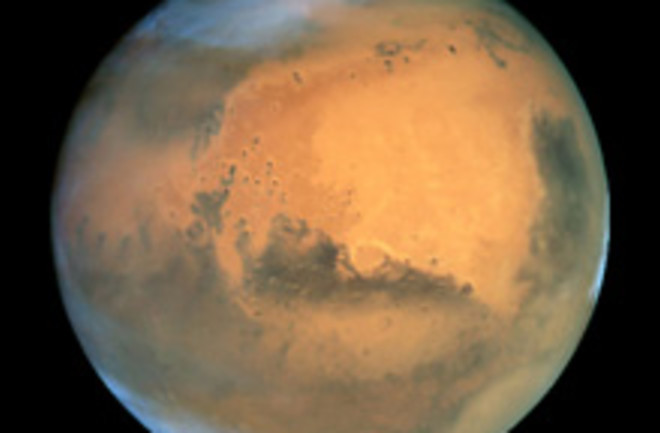 Early Mars may have been both wet and cold, with average temperatures well below freezing, according to a new study. But researchers also saw signs of the presence of dissolved minerals that would allow for liquid water—the same way salt can melt ice on a road—thus opening up the possibility that the planet sustained life. Scientists have long been at odds over the history of Mars, debating whether water formed much of its landscape or whether temperatures were simply too cold to have allowed liquid water to flow. But in the new study, published in Nature, researchers used a computer model to show that both could have been possible because fluids containing dissolved minerals would have remained liquid at temperatures well below 273 degrees Kelvin -- the freezing point of pure water. "Our results are compatible with Mars lander and orbiter data and with climate modeling, and suggest a cold and wet early Mars" [Reuters], the authors wrote. Led by NASA scientist Alberto Fairen, the researchers chose compositions based on weathered basalts for the Martian fluids in their model to match the chemical compositions of rock found at Mars landing sites [Reuters]. The results revealed that warm temperatures wouldn’t have been necessary to support salt-loving life forms [Universe Today] because a number of minerals could have lowered the melting point of water in a frozen Martian environment and help explain the early Mars climate paradox, they said. "The stability against freezing of Martian fluids can explain saline water activity on the surface of Mars at mean global temperatures well below 273 Kelvin" [Reuters], said the study. Related Content: 80beats: Scientist Smackdown: Did Mars Phoenix Find Liquid Water? 80beats: NASA Probe to Find Out: Does Mars Have Burps of Life, or Burps of Rock? 80beats: Mars Rover Spirit Shows Signs of Age, Including Senior Moments