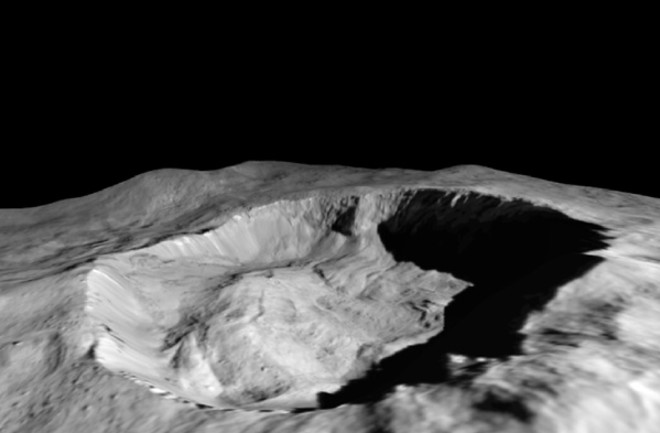 Tiny density changes in the crust of Ceres indicate that the dwarf planet's pole has wandered over time. The path it took suggests a liquid ocean once sat beneath the surface. (Credit:NASA/JPL-Caltech/UCLA/MPS/DLR/IDA/ASI/INAF)

NASA’s Dawn mission has uncovered a wealth of information about the largest objects in our asteroid belt: Vesta and Ceres. Since its arrival at the latter in 2015, the spacecraft has revealed an active icy world full of surprises, one more of which has just risen to the fore: Evidence now indicates that Ceres pole has wandered by at least 36° over time, and the path it took to its present location hints at an ancient slushy ocean beneath its crust. In a paper published October 8 in Nature Geoscience about Ceres composition, Planetary Science Institute Senior Scientist Pasquale Tricarico outlines density variations in the dwarf planet’s crust, which can be used to identify features present and past. For example, today the dwarf planet’s topography shows signs of a high-density feature along its equator that lines up with Ahuna Mons, Ceres’ highest peak and former ice volcano.

But Tricarico also identified what appears to be a remnant ridge associated with Ceres’ “paleo-equator” of the past, which indicates that the dwarf planet’s pole has wandered over time. Furthermore, other surface features such as Samhain Catenae and Uhola Catenae, which are sets of fractures in the dwarf planet’s crust, match predictions to models of “true polar wander,” in which the surface of a body reorients itself over time, leaving the material underneath to lag behind.

“The most surprising aspect of this paper is to me the observation that the pole of Ceres must have followed an indirect path to its current pole,” said Tricarico in a press release. An indirect or “multi-step” reorientation, he went on, “could be because the crust and mantle were weakly rotationally coupled, allowing the crust to start reorienting while the mantle would lag behind.”

For one to lag behind the other, they must not have been directly connected, possibly because of a water ocean filling the space between the two. The presence of an ocean would reduce friction and prevent the crust and mantle from moving together.

This isn’t the first evidence for an ancient global ocean on Ceres, and builds on previous methods of using tiny differences in gravity that arise from differences in surface density to learn about the dwarf planet’s history. And the more we learn about Ceres and its past, the more we learn about how icy bodies in general work. Such bodies pepper the solar system, and as new information about their rich and active pasts comes to light, the better planetary scientists can understand how our solar system, and others like it, formed and evolved over time.