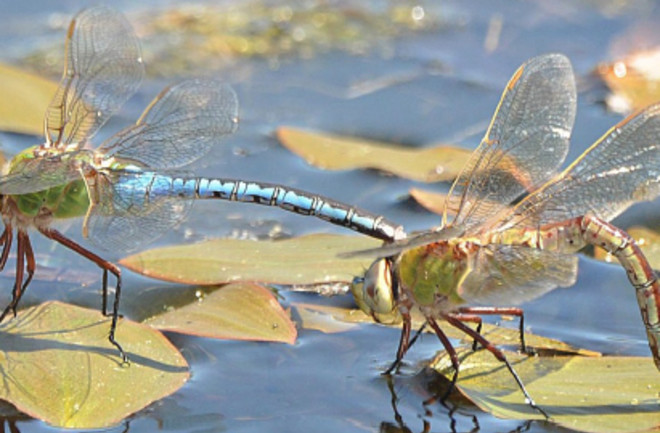 Find out more about Dragonfly Monitoring and other great citizen science projects on SciStarter!

“I'm an aquatic entomologist, and dragonflies and damselflies are the most colorful and noticeable insects in the habitats in which I work,” says Dr. Celeste A. Searles Mazzacano, a staff scientist and Aquatic Conservation Director at the Xerces Society. In her role as the project coordinator for the Migratory Dragonfly Partnership, she continues to add acclaim to these fast and furious little critters, “The nymphs are amazing predators with extremely cool adaptations for feeding—hinge-toothed lower lips that shoot out faster than the eye can see—and respiration rectal gills that double as a jet-propulsion chamber!” The Migratory Dragonfly Partnership (MDP) is a collaborative partnership that was set up between experts, nongovernmental programs, academic institutions, and federal agencies from the United States, Mexico, and Canada, in which citizen scientists play an integral role. There are many questions currently surrounding dragonfly migration that MDP is trying to answer. For example, says Dr. Mazzacano, “What is the southern extent of migration, what is the relationship between resident and migratory members of the same species at the same site, and do all individuals that migrate south from a single place, go to the same destination in the south, or do individuals drop out and overwinter at different latitudes?” The primary goal of the project is to answer some of these questions and to provide information needed to create cross-border conservation programs to protect and sustain this amazing migratory phenomenon.

Green Darner on the finger of a course participant. Courtesy Xerces Society. The Project has enjoyed an extremely positive response from the citizen science community. “Because the adults are so lovely, I consider dragonflies to be the poster children of aquatic invertebrates. They are much easier to see and care about than the equally important but less obvious mussels, stoneflies, and mayflies,” adds Mazzacano. Many people are fascinated by dragonflies but don't really know anything about them, and consequently want to learn more, and find good places to observe them. “Interestingly, many birders are also getting into dragonflying.” There are five dragonfly species that are the most regular annual migrants in North America. The Migratory Dragonfly Partnership collects data on them in two ways, via two different but connected citizen science projects. For the Migration Monitoring project, citizen scientists report dragonflies heading south in the late summer and fall (these may be in the tens of thousands, thousands, or a steady trickle of individuals—it varies); and the Pond Watch project, where the local life history and the relationship between resident and migrant dragonflies of the same species in the same habitat is investigated. Here citizen scientists are asked to report on the presence or absence, abundance, and behaviors of migratory species at their Pond Watch site on a regular basis throughout the year. The project has only been running for three years, which means that MDP is just now beginning to accumulate enough data to publish findings. “One of the first products was a comprehensive review paper by steering committee member and [retired Rutgers University] odonate expert Dr. Mike May ,” says Mazzacano. “And we have a paper in the works about the results of the stable hydrogen isotope studies done on wings of migrating dragonflies to determine how far they traveled from the site where they developed and emerged as adults.” That paper should be out later this year. With current emphasis on the unique ability of citizen science projects to meet Next Generation Science Standards (NGSS) by providing opportunities for inquiry, MDP is now partnering with Dr. Karen Oberhauser at the University of Minnesota, who is working on dragonfly-based curriculum for school children. “And more immediately, we are beginning to work now with local organizations that focus on environmental opportunities for Hispanic youth in the Portland Oregon area to offer dragonfly-based environmental education in Spanish,” notes Mazzacano. As with many hobbies, after all the inquiry has been satisfied, it comes down to enjoyment and recreation. The most exciting thing about the project for Mazzacano is that it gets more people outdoors interacting with insects in a positive way, and connects those people to their local ponds and wetlands. “Freshwater is the most threatened resource we have, and when people learn about and start to love the creatures in local waters that they might not even have known existed prior to this, they will become more engaged in trying to protect those resources,” says Mazzacano with enthusiasm. And of course it has also been exciting for her, thanks to the data collected by citizen scientists, to be able to answer some of the many questions that exist about dragonfly migration. “I think this connection to freshwater is a benefit that will go on long after individual citizen scientists learn about, and help with MDP projects.” Would you like to become a citizen scientist in this project? Connect to the Migratory Dragonfly Partnership here, register your local pond, pack a picnic hamper and head out to monitor the timing, duration, and direction of travel of migrating dragonflies. Note any additional behaviors, such as observed migratory flight, feeding or mating, and you are encouraged to take photos or record video coverage. When gathered across a wide geographic range and throughout a span of years, these data will provide answers to questions about which species are regular migrants; the frequency and timing of migration in different species; sources, routes, and destinations of migrants; and the health of their environment.