The new season of Doctor Who starts on April 5! W00t! Mild spoilers below: 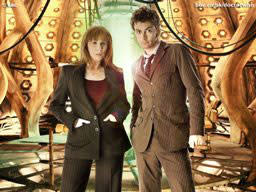 The first episode is called "Partners in Crime", and Catherine Tate returns as Donna Noble, which anyone who reads this blog should know by now. Personally, I think her character had a lot of room in it for some great development between her and the Doctor. When he said he doesn't need anyone, and she replies, "Yes you do, 'cause sometimes I think you need someone to stop you,"... well. The Doctor is a tortured man, and I'd like to see more of this. We got a glimpse of that in "Family of Blood" and the season 3 finale as well. I certainly hope they develop this idea more in Season 4, and given what spoilers I've heard... well, we'll see.