The discovery of two ghostly galaxies created a hullabaloo in the astronomical community. But the jury’s still out on what’s really going on. 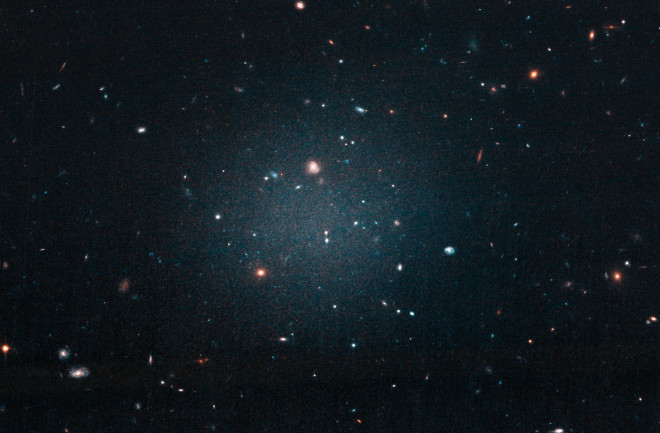 This blurry cloud is actually a galaxy, and yes, it’s weird that you can see through it to the galaxies beyond. Some astronomers think galaxy DF2 is see-through because it’s missing dark matter. Others aren’t convinced. (Credit: NASA, ESA and P. van Dokkum/Yale University)

This article appeared in Discover’s annual state of science issue. Support our science journalism by becoming a subscriber.

Some 60 million light-years from Earth — by the estimate of one team of researchers, anyway — a pair of strange galaxies is causing a cosmic stir. The bizarre galaxies, named NGC 1052-DF2 and NGC 1052-DF4 (or DF2 and DF4, for short), are the first known galaxies born without any significant amount of dark matter. If confirmed, their existence would throw a wrench into our understanding of how galaxies form and evolve. But, as Carl Sagan liked to say, extraordinary claims require extraordinary evidence. And, according to some researchers, the evidence for these dark-matter-deficient galaxies doesn’t hold up.

The Claim: Nothing to See Here

Astrophysicist Pieter van Dokkum of Yale University was certainly surprised when he first spotted DF2. After data from the Dragonfly Telephoto Array, the Sloan Digital Sky Survey, the Hubble Space Telescope and Keck Telescope were analyzed, the implications were clear: DF2 isn’t full of dark matter like other galaxies.

“This thing is astonishing,” says van Dokkum, “a gigantic blob that you can look through. It’s so sparse that you see all of the galaxies behind it. It is literally a see-through galaxy.”

The astronomers looked to the speed of DF2’s globular clusters (large groups of old stars) to estimate how much mass the galaxy holds. When they compared their mass estimate to how much matter was visible, the two were a close match, suggesting the galaxy is only composed of visible matter.

This calculation depends on an accurate assessment of the distance to the galaxy, however. Addressing criticisms about their estimate, van Dokkum’s group updated their DF2 distance to about 61 million light-years — slightly closer to Earth, but still within the range where it would have negligible dark matter.

The group went on to find a second, similar galaxy, DF4, which likewise has an apparent dearth of dark matter. “I think this is definitive,” says van Dokkum. “The [data] cannot be argued with: It is caused by well-understood stellar physics, and [is] as direct as distance indicators get.”

A computer simulation shows the evolution of dark matter in the universe. But is it part of every galaxy? (Credit: Millennium-II Simulation)

The Counterpoint: You’ve Got It All Wrong

Ignacio Trujillo of the Instituto de Astrofísica de Canarias agrees that if DF2 were 60 million to 65 million light-years away, as van Dokkum suspects, then it would be a strong candidate for the first example of a galaxy born without dark matter. But if DF2 is closer, the galaxy’s observed properties would fall in line with your typical dark-matter-dominated galaxy.

Trujillo and his team set out to independently determine the distance to DF2. They repeated van Dokkum’s group’s measurements and added an analysis of the luminosities of red giant stars within it. Taking that data together, the team concluded DF2 is likely only about 42 million light-years away, while DF4 is only about 46 million light-years away. This means the two galaxies harbor as much dark matter as you would expect from average, run-of-the-mill galaxies.

“All in all,” Trujillo’s team concluded in their response paper, “the proposition that both NGC 1052-DF2 and NGC 1052-DF4 are ‘missing dark matter’ is still far from being placed on sure footing.”