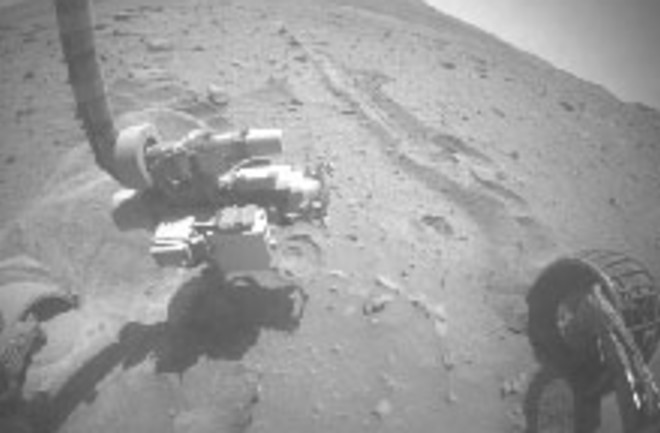 After ten months of trying to extricate the Mars rover Spirit from a sandy patch on the Red Planet, NASA has finally given up. The space agency said Tuesday that Spirit will no longer be a fully mobile robot, roving over an alien planet. It will instead be a stationary science platform--which means

a sedentary life for the robot geologist [that] has taken thousands of images and found evidence in Mars' rocks of a wetter, warmer past [BBC].

Ten months ago, as Spirit was driving south beside the western edge of a low plateau called Home Plate, its wheels broke through a crusty surface and churned into soft sand hidden underneath [NASA]

. The rover has been stuck there ever since, and now only four of its six wheels are functioning. Since all the maneuvers that the NASA instructed the rover to try have failed to free it, the sandpit known as "Troy" will be Spirit's final resting place. Spirit may stop roving, but hopefully it won't stop working. In the coming weeks, NASA will focus on tilting the rover to the north so that more sunlight will fall on its solar panels during the long, cold Martian winter. Even if the rover does settle into a better position,

it is likely Spirit will maintain so little energy in its batteries that it will go into hibernation, perhaps as soon as April. It will not emerge from that state until August or September, when the Sun gets high enough in the Martian sky to power up the rover's systems [BBC News].

If Spirit does make it through the winter (when temperatures are expected to reach -55 degrees Fahrenheit), it can resume studying the

tiny wobbles in the rotation of Mars to gain insight about the planet's core. This requires months of radio-tracking the motion of a point on the surface of Mars to calculate long-term motion with an accuracy of a few inches [NASA].

This would help determine if the core of Mars is liquid or solid. Tools on Spirit's robotic arm are also expected to study variations in the composition of nearby soil and see how they're affected by water.

Since landing on Mars in 2004, Spirit has trekked nearly five miles and climbed a mountain as tall as the Statue of Liberty. Its twin, Opportunity, continues to drive and explore [Associated Press].

So far, NASA has spent more than $900 million on its Mars exploration rover program and the data acquired by the vehicles has generated about 100 scholarly papers, including special editions of the leading international journals Science and Nature. Related Content: 80beats: Spirit Rover's 6th Anniversary on Mars is likely To Be Its Last 80beats: Future Looks Grim for Stuck Mars Rover 80beats: Mars Rover Will Try Daring Escape From Sand Trap of Doom 80beats: Will This Mars Rover Ever Rove Again? Spirit Get Stuck in the Sand 80beats: Mars Rover Spirit Shows Signs of Age, Including Senior Moments DISCOVER: Mars Rover Delves Into Crater DISCOVER: Those Mars Rovers Keep Going and Going…