Even in the oldest, deadest galaxies out there, young stars continue to be born. 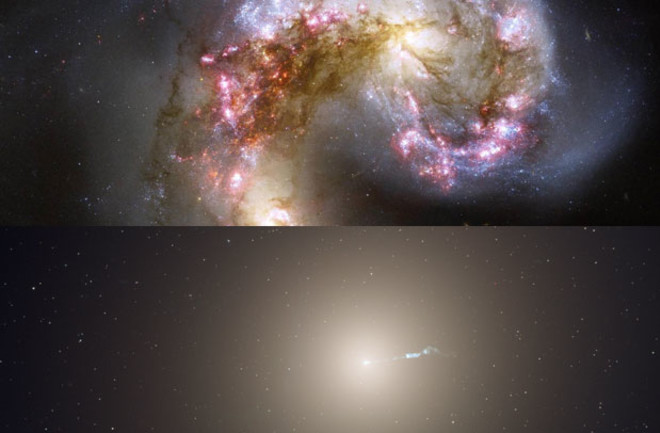 Dull, red-and-dead galaxies like Messier 87 (below) may not look as pretty as the youthful Antennae Galaxies (above), but they, too, contain regions where stars are forming. | NASA Hubble Heritage Team/ESA Hubble Collaboration

“Red and dead” is the unflattering label astronomers attach to giant elliptical galaxies full of aged stars. But funeral plans may be premature. With the help of the Hubble Space Telescope’s recently enhanced vision, researchers have uncovered flickers of star formation in these quiescent galaxies.

Nobody had ever observed star birth in red-and-dead galaxies (old stars glow red, while younger stars are bluer), but University of Michigan astronomer Joel Bregman had a hunch that some of them still harbor enough pristine gas to sustain a stellar nursery. He decided to point Hubble’s Wide Field Camera 3, an addition made to the scope in 2009, at four nearby aging galaxies to hunt for the telltale ultraviolet glow of young stars. Bregman considered three of them promising candidates. The fourth, named Messier 105, was the ultimate test: It was the reddest and deadest galaxy he could find. “We looked at probably the universe’s most boring galaxy,” he says. “We thought nothing would be going on there.”

As Bregman hoped, dozens of young stars turned up in each of the three promising galaxies—and as an added surprise, they even appeared in Messier 105. The rate of star formation is a small fraction of what goes on in a younger galaxy like the Milky Way, but even these low levels of activity will force theorists to revise their models of how galaxies evolve.