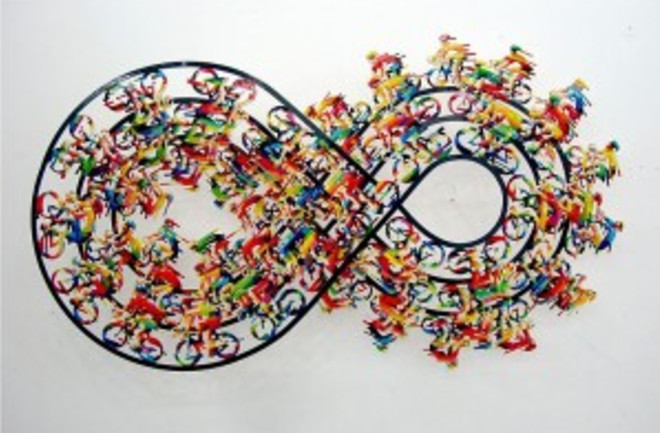 A work by Israeli artist David Gerstein. Wikimedia Commons. Shortly after my post earlier this spring about the dubious idea of π day, I started reading David Foster Wallace’s Everything and More: A Compact History of Infinity. It was the last book he published before his suicide. He called it a booklet. It was part of a series of what were intended as short accounts of Great Discoveries, but it was 319 pages long. That is short for Wallace, I guess. His novel Infinite Jest was more than 1,100 pages. And who knows how long A Pale King might have been had he lived to complete it? It was published unfinished after his death. It’s fair to say that Everything and More was not very well received, with some particularly nasty comments from mathematician/writers like Rudy Rucker (his review was titled "Infinite Confusion"). Another critic, in Notices of the American Mathematical Society, complained that the book was “laced through and through with blunders of every magnitude.” Others admired the book but with great reservations: ‘Not just a bit difficult," a reviewer wrote, "but frequently, intensely, skull-clutchingly difficult.” I think it was wonderful. There were parts I only sort of understood, and I’ve been bogged down for awhile on page 186. But more than anything I can remember, Everything and More captured the shivering feeling -- wonder, exhilaration, horror -- that can come from contemplating the infinitely large and the infinitely small. It is astonishing how vast a picture of this territory Wallace held in his head and how he was able to at least convey the contours of his obsession. “The dreads and dangers of abstract thinking are a big reason why we now all like to stay so busy and bombarded with stimuli all the time,” Wallace wrote. “Abstract thinking tends most often to strike during those moments of quiet repose. As in for example the early morning, especially if you wake up slightly before your alarm goes off. . . .” It is a reliable way to "drive yourself crazy in bed in the morning" and without anyone there to help. In those yellow-grey hours, one of the things Wallace would think about was numbers. Natural numbers, real numbers, irrational numbers, imaginary numbers, transcendental numbers. It had been a long time since I had thought of these names. The last three sounded particularly tantalizing. The real numbers are those that can be plotted on an infinitely long and infinitely dense number line -- quite an abstraction in itself. They include the natural numbers (“counting numbers” like 1, 2, 3 . . .), the integers (the counting numbers and their negatives), and the rational numbers -- those that can be expressed as a ratio of two integers. Anything expressed as a ratio can be written as a decimal that is either finite in size (1/4 = .25) or in structure, repeating indefinitely with the same pattern (2/3 = .6666 . . . or, more interesting, 1/7 = .142857 142857 142857 . . . and 11/13 is 0.846153 846153 . . .) Irrational numbers, as I wrote in the earlier post about π day, are irrational only in that they cannot be expressed as ratios. Their decimal expansions extend infinitely and never repeat. Pi is not just irrational. It is also transcendental, meaning that it is “not a root of a non-zero polynomial equation with rational coefficients.” What I think that means is that these numbers transcend description by a simple algebraic formula. (Someone please correct me if that is too loose. I am already in over my head.) Though irrational and transcendental, pi can be computed to any degree of precision. You just have to devote the time and the will, knowing that you will never really be done. As exotic as they sound, all of these numbers can be thought of as infinitely small points on the endlessly inward and endlessly outward number line. The next step in weirdness leads to the imaginary numbers like i, which is the symbol for the square root of -1. These are off the real number line, plotted instead on a perpendicular axis. Combine an imaginary and a real and you get a complex number, occupying a point on “the complex plane” -- the great space hovering between the arms of the orthogonal boundaries. Multiplying by i is the equivalent of a rotation -- a handy tool but what is i really? Do we invent this stuff or does it exist in a separate realm? Far more recalcitrant than all of these are the noncomputable numbers. These cannot be calculated by any conceivable computer. Worse still, there are infinitely more noncomputable numbers than computable ones. The proof can be traced to the 19th-century mathematician Georg Cantor -- the “diagonal argument” might ring a bell or the idea of countable versus uncountable infinities. The way I try to think about this is that for any computable number there is an algorithm -- a computer program -- that can churn it out in a finite amount of time. This program, like all programs, would consist of a string of 1s and 0s -- the binary rendition of a number that can be represented as a point on the real number line. There is an infinity of these bit strings. But if you plotted every one, there would still be huge gaps in between -- the numbers that no algorithm can produce. Noncomputable. And if you can't compute them, in what sense do they exist? Cantor is the consuming passion of Wallace’s book. The mathematician suffered from severe depression and was in and out of asylums, dying in 1918 in a sanatorium. Wallace rejects the romantic notion that Cantor was driven mad by infinity, that he was a modern-day Prometheus, “the one who goes to forbidden places and returns with gifts we all can use but only he pays for.” Cantor’s fire was his understanding of infinity. But that, Wallace writes, is not what killed him.

Cantor’s work and its context are so totally interesting and beautiful that there’s no need for breathless Prometheusizing of the poor guy’s life. The real irony is that the view of ∞ as some forbidden zone or road to insanity . . . is precisely what Cantor’s work overturned.

He made infinity less scary, manageable by our little minds. “Saying that ∞ drove Cantor mad is sort of like mourning St. George’s loss to the dragon: it’s not only wrong but insulting.” After I put down Everything and More, I picked up the biography of Wallace by D.T. Max. You don’t get the impression that it was infinity that drove Wallace to suicide. It may have had more to do with MAO inhibitors, the primitive but apparently effective antidepressant he had taken for years, and his decision, supported by doctors, to give them up because of their side effects. Nothing he went on to try worked better, even electroconvulsive shock, and when he came back to the old drug it didn't help him anymore. “Everything had been tried, and he just couldn’t stand it anymore,” his father said. (This is all from his obituary in the New York Times. Still, you have to wonder what was going through Wallace’s mind when he walked inside his garage while his wife was away and hung himself. The epigraph in Everything and More is a streak of Greek letters, like a squished mathematical formula. Wallace said that it was meant as a joke. Translated, it means, "It is not what's inside your head, it's what your head's inside." In the end it was a noose. He wrote this, about suicide, years earlier in Infinite Jest:

The so-called ‘psychotically depressed’ person who tries to kill herself doesn’t do so out of quote ‘hopelessness’ or any abstract conviction that life’s assets and debits do not square. And surely not because death seems suddenly appealing. The person in whom Its invisible agony reaches a certain unendurable level will kill herself the same way a trapped person will eventually jump from the window of a burning high-rise. Make no mistake about people who leap from burning windows. Their terror of falling from a great height is still just as great as it would be for you or me standing speculatively at the same window just checking out the view; i.e. the fear of falling remains a constant. The variable here is the other terror, the fire’s flames: when the flames get close enough, falling to death becomes the slightly less terrible of two terrors. It’s not desiring the fall; it’s terror of the flame yet nobody down on the sidewalk, looking up and yelling ‘Don‘t!’ and ‘Hang on!’, can understand the jump. Not really. You’d have to have personally been trapped and felt flames to really understand a terror way beyond falling.

But what was it that was on fire?