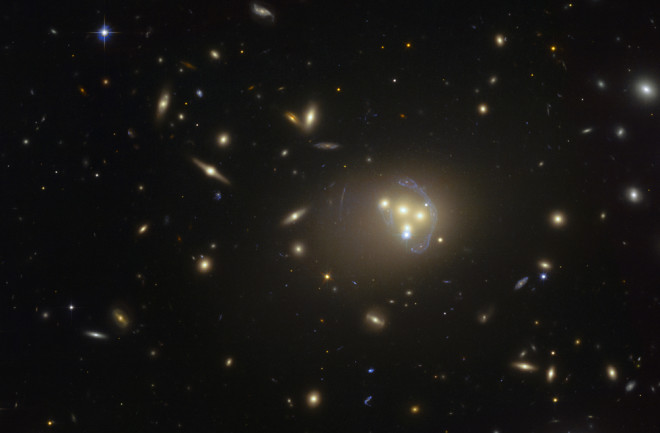 Astronomers took advantage of this gravitational lensing to study the dark matter within galaxy cluster Abell 3827 (above), where a distant blue galaxy's light spirals around four galaxies. | NASA/ESA/ESO

Astronomers have long thought dark matter — the famously invisible mystery substance that glues together galaxies and galaxy clusters — interacts with any material only by its gravitational pull. But last April, scientists announced the first evidence that dark matter may also use friction to push against itself.

One of the tricks astronomers use to study dark matter — which, being invisible, can only be studied indirectly — is gravitational lensing. Anything with mass warps the nearby space, so as light passes near that massive object, its path bends, following the warps. Sometimes that can result in a faraway object appearing distorted or even multiple times around a nearer massive object, like a menu viewed through the bottom of a wine glass.

An object's gravity can distort the light traveling nearby. | NASA, ESA and L. Calçada

Using the Hubble Space Telescope, astrophysicist Richard Massey at England’s Durham University and colleagues identified some 30 magnified and warped images of a distant background spiral galaxy that appeared in the core of a nearby cluster of galaxies. Through gravitational lensing, the spiral galaxy’s light essentially photobombed the cluster and, in doing so, illuminated how matter — both light and dark — is distributed within the cluster and around one of its four central galaxies.