Dark Energy: No Longer a Surprise

A bit of science news: Alexey Vikhlinin and collaborators have used observations from the Chandra X-ray satellite to uncover new evidence for dark energy. (More info here, and the paper is here.) In particular, they simply count the number of galaxy clusters with various masses at various redshifts, and compare with the predictions of models with and without dark energy. If there were no dark energy, matter would keep clustering on larger and larger scales as the universe expanded, making new clusters all the way. But if dark energy eventually takes over, the creation of new clusters begins to turn off, as the dark energy provides an extra push of expansion beneath the feet of the particles that would like to cluster together, preventing them from doing so. Just to guide the eye, here are plots of the number of clusters (vertical axis) as a function of their mass (horizontal axis) at two different redshift ranges -- near is on top, far is at the bottom. The left plot, which fits the data, has an appreciable cosmological constant; the right one, which doesn't, doesn't. The graphs are a bit confusing, because dark energy affects not only the growth of structure, but also the relation ship between redshift and distance. But the point is that dark energy kills off cluster formation at late times.

You may ask the question: so? Didn't we find dark energy ten years ago, and haven't we confirmed its existence several times since? Yes, and yes. In a sense, this result doesn't teach us anything we didn't already know. But we should resist the temptation to become too blase about the whole thing. (Notwithstanding that I've been guilty myself.) On the one hand, this is a new manifestation of dark energy: a dynamical effect on the evolution of matter, rather than simply a background effect on the expansion of the universe. This is of great interest to astronomers, and should help to constrain alternatives to the now-standard picture. But on the other, more important hand, it remains astonishing that we have this preposterous model that keeps fitting the data. We shouldn't lose our sense of wonder that we're able to understand as much of the universe as we do, or that the reality of cosmology is so much more interesting than simple theoretical models of the past would have predicted. 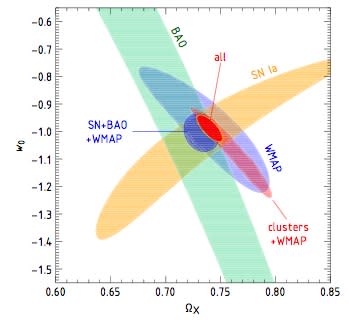 Here is the graph from the paper showing limits on the equation-of-state parameter, w. Horizontal axis is the fraction of dark energy (about 75%, eventually I'll have to stop using 70%), vertical axis is w (about -1, plus or minus 0.1). Looks pretty much like a cosmological constant (w=-1) from here, although there is obviously wriggle room.