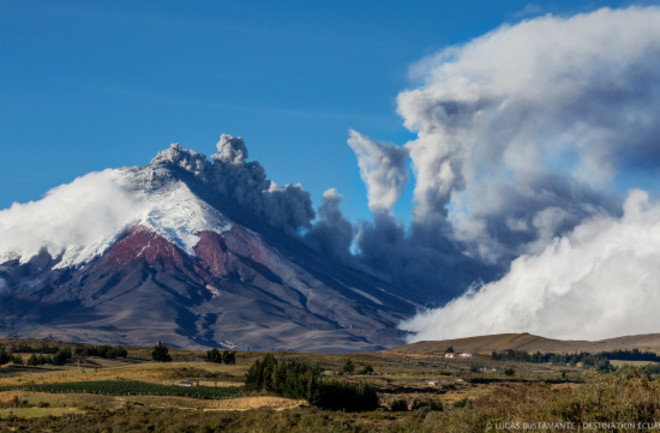 Billowing ash from this week's eruptions of Cotopaxi in Ecuador, taken from near Chilcabamba Eco Lodge.

Cotopaxi in Ecuador continues to rumble after its first eruption in 70 years earlier this month. Over the last week, the volcano has been emitting almost constant steam-and-ash plumes punctuated by small explosions---all signs that magma is rising into the volcano. The steam-and-ash plumes have mostly been 1-2 kilometers in height and rangers in the National Park surrounding the volcano have reported a few millimeters of fine ash fall. You can check out some pictures of how this ash is impacting the local communities, where farmers have said that their livestock is beginning feel the effects. Ash from Cotopaxi has reached as far as the Pacific Ocean (see below) during this week of unrest. Dozens of earthquakes along with constant harmonic tremor were recorded at Cotopaxi over the last day as well. The Ecuadoran government has been preparing for evacuations if the activity intensifies and has earmarked ~$500 million for potential damage and displacement due to an eruption.

The ash plume from Cotopaxi (grey-brown) seen drifting to the west over the Pacific Ocean on August 26, 2015.

Now, if a restless volcano on the doorstep of a large population center wasn't bad enough, the government is being besieged by protests from opposition parties who are unhappy with the Ecuadoran president Rafael Correa. He has made it clear that his number one priority is preparing for Cotopaxi's potential eruption, but the civil unrest in Quito has continued. The president visited some of the towns near Cotopaxi where they are preparing for evacuations. Farmers in those regions grow flowers and broccoli for export, and a large eruption from Cotopaxi could cause over $100 million in damage to those crops. Ash has also put a damper already on ecotourism in the area around the volcano. Even soccer clubs have made contingency plans if Cotopaxi's eruptions become larger, really showing how seriously the local citizenry are taking this rumbling. Meanwhile, Tungurahua, one of Ecuador's other active volcanoes, is also erupting. The latest report from IG-EPN lists ash plumes reaching 2 kilometers over the volcano from a series of small explosions with constant tremor. You can check out webcams pointed at both Cotopaxi and Tungurahua.