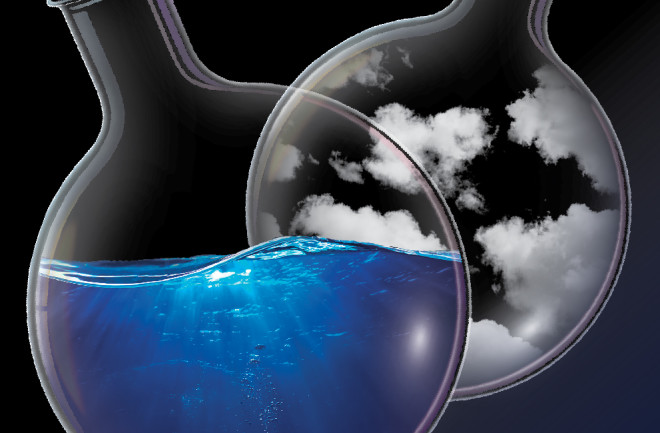 In Jeffrey Bada’s laboratory at the University of California, San Diego, there’s a cardboard box containing the earliest evidence of how life began on Earth. The box holds hundreds of tiny vials filled with grimy, brown residues collected in the early 1950s by a University of Chicago graduate student named Stanley Miller. Each vial is marked with a page number corresponding to a notebook where Miller recorded an experiment undertaken with his adviser, the Nobel Prize-winning chemist Harold Urey.

Their goal was to synthesize amino acids — the building blocks of life — as they might have been created on early Earth. The results launched a hunt for life’s origins that’s now uncovering these building blocks in surprising places, like the surface of comets and in deep-sea hydrothermal vents.

The modern origin question has bedeviled scientists since Charles Darwin proposed his theory of evolution in the 19th century. If all modern species evolved from earlier life-forms, the branching must have begun with some common ancestor. Darwin speculated that our microbial Eve arose from a “warm little pond with all sorts of ammonia and phosphoric salts.” Eight decades later, Urey sought to be more precise. He enlisted research on early planetary conditions to show how interactions between the atmosphere and oceans might have produced an organic “primordial soup.”

Inspired by a 1953 lecture in which Urey outlined his ideas, Miller proposed to cook up the soup in a lab. Urey was skeptical. At 23 years old, Miller had scant experience as an experimentalist. Urey gave him one year and a budget of under $1,000.

Miller instructed the campus glass blower to make an apparatus with two interconnected chambers, one representing the ocean and the other standing in for the atmosphere. During the experiment, a flame boiled the ocean water, simulating evaporation. The steam traveled through a tube into the atmospheric flask, which contained hydrogen, methane and ammonia. An electric spark simulated lightning. A second glass tube condensed the vapor, making the humid atmosphere rain back down into the ocean.

Within less than a week, the clear liquid darkened. Miller analyzed the brew and found five amino acids, which are the organic constituents of proteins.

Published in the May 15, 1953, issue of Science, the results galvanized scientists and generated global head-lines. The New York Times credited Miller and Urey with inventing “a laboratory Earth.” Time dubbed the experiment “semi-creation.”

And it turns out that Miller under-reported the richness of his prebiotic soup. When Bada’s lab inherited the leftover residues after Miller’s death in 2007, Bada examined them using modern instruments. He detected more than eight times the number of amino acids found by Miller.

The surprising success of the Miller-Urey experiment has made it a classic in many textbooks, but there was also a problem at its core — namely, Urey’s hypothesis that the early atmosphere was flush with methane and ammonia. “In fact, it was carbon dioxide with nitrogen, or carbon dioxide with a little methane,” Bada says. Miller knew about the problem, and when he replicated his experiments in the 1980s using a more plausible mix of gases, most turned up no amino acids.

About a decade after Miller’s unsuccessful second attempt, the European Space Agency added a young German chemist named Uwe Meierhenrich to its Rosetta mission to Comet 67P/Churyumov–Gerasimenko. Meierhenrich helped develop instruments that allowed the Philae lander to probe the comet’s surface for organics. But to test Philae’s abilities, he’d need a comet on Earth.

Meierhenrich found what he needed at Leiden University in the Netherlands, where astrochemists were making artificial cometary ice to test how these dirty snowballs form. Their technique was akin to Miller’s simulated primordial soup. The Leiden scientists replicated the frigid vacuum of interstellar space, then introduced the chemicals found in cometary ice and hit them with ultraviolet light like that emitted by stars. This process produced mere micrograms of comet, but it was enough to test Rosetta’s instruments. The equipment worked impeccably — and detected 16 amino acids.

Although researchers suspected they’d see amino acids on 67P — having already detected them in certain primitive meteorites — nobody expected that the organics would form instantaneously in a simple ice analog on Earth. As doubt grew over the Miller-Urey experiment, Meierhenrich’s research lent strong support to an alternative hypothesis: that the organic ingredients of life came from outer space.

And support for a cometary origin has only grown since Meierhenrich published his initial results in 2002. Twelve years later, the Philae lander descended onto 67P and detected organics that matched the ice from Leiden.

Earlier this year, Meierhenrich's lab at the University of Nice Sophia Antipolis reported another major advance in Science. Analyzing ice analogs with a new technique called multidimensional gas chromatography, they detected the chemical ribose — no ordinary organic. The complex sugar is the chemical backbone of RNA, which is widely acknowledged as the genetic regulator of life before DNA. Many researchers even theorize an “RNA world” that predates our own. These molecules would have evolved into the first living organisms.

Ribose is also difficult to produce. Living cells do it well, but the principal inorganic process for making complex sugars is called the formose reaction. It requires careful lab preparation of concentrated formaldehyde. Meierhenrich thinks that a similar reaction naturally takes place in interstellar space — without the fussy chemistry. “You see this in cometary ice,” he says. “You do not see this on the surface of early Earth.”

However scientists do see the formose reaction in at least one terrestrial environment. In 2011, researchers at the Max Planck Institute of Colloids and Interfaces synthesized ribose in conditions simulating a hydro-thermal vent.

Alkaline hydrothermal vents are found on the seafloor near where tectonic plates meet. Hot water seeps up from beneath the Earth’s crust, transporting a rich mix of minerals that provide chemical sustenance to communities of microbes. Explorers first saw a cluster of these white chimneys near the Mid-Atlantic Ridge in the early 2000s. Ever since, researchers have theorized that such vents could have nurtured the earliest life on Earth.

“You have a kind of one-stop shopping,” observes Linda McGown, a chemical biologist at Rensselaer Polytechnic Institute. The vents provide the energy source, raw materials and environment for chemicals to concentrate and reactions to take place.

McGown’s lab is testing this idea by growing mineral chimneys in glass vessels and seeding them with organics. Last year, her team showed that vent-dwelling ribonucleotides — molecular RNA precursors — can form into short chains of RNA. Placing her “chemical gardens” under high pressure, to simulate conditions on the ocean floor, only improves the efficiency of RNA formation. And while McGown’s bench-top experiment required lab prep of the chimneys’ raw materials to obtain RNA linkages, her newest research shows that unprepared minerals will do the trick in pressurized conditions.

Nevertheless, McGown refuses to conclude that Darwin’s “warm little pond” must have actually been a hot hydrothermal vent. Given ongoing uncertainty about early Earth conditions, she believes in keeping an open mind.

Her pragmatism is shared by Carnegie Institution mineralogist Robert Hazen, one of the most widely respected researchers in the study of life’s origins. Instead of seeing alternate theories as competitive, he contends that “the organic molecules come from many sources.” Space and Earth both contributed to life.

New possibilities are even percolating inside the old Miller apparatus. Revisiting Miller’s unsuccessful experiment from the 1980s, Bada discovered that high acidity inhibits the formation of amino acids in a carbon dioxide atmosphere. By increasing the realism of the early Earth simulation with the addition of carbonate minerals, he’s managed to boost the pH and make amino acids in abundance.

All these potential pathways to life on Earth might mean we’ll never reach a definitive solution to Darwin’s original conundrum. However, the wealth of opportunities helps resolve a related question that is equally profound. “The universe is pregnant with molecules ready to form and organize,” Hazen says. Searching for the source of life on Earth, Miller and Urey discovered the plausibility of life throughout the cosmos.

[This article originally appeared in print as "Brewing Life."]