A fast-growing discipline relies on psychology and computer simulations to prevent deadly stampedes. 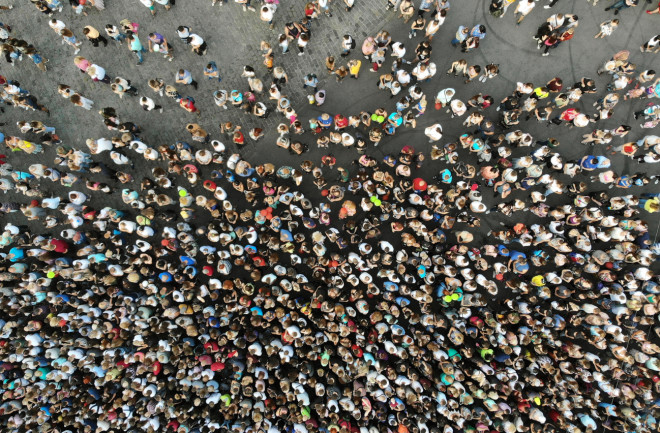 It was just after 9 p.m. when rapper Travis Scott took the stage at his Astroworld music festival in Houston last November. Tens of thousands of fans rushed toward the stage to be closer to the performer — and panic sparked when people struggled to stay on their feet. The crowd surged for another hour as the concert continued, and 10 people ultimately died from compression asphyxia in the crush. Another 25 were hospitalized and hundreds were injured.

One lawsuit filed against Scott and the venue by an injured attendee claimed the stampede could have been avoided with advanced planning and proper safety precautions. Hundreds of other lawsuits have also been filed against the rapper and venue by other injured parties. Problematically, many venues and event planners don’t include crowd management in their preparations, although people have died in recent years in chaotic crowds like the one at Astroworld. Experts warn the frequency of such disasters are increasing.

The discipline of crowd science seeks to avoid this. Crowd science relies on behavioral psychology and computer simulations to analyze how groups of people might react in a specific location, such as a subway station, and under certain conditions, such as hearing an alarm or smelling smoke. The computer programs are growing more sophisticated, and scientists can now bestow a multitude of personalities and varied reactions to the simulated people.

Crowd science has been developing since the 1950s. In early studies, researchers themselves walked within crowds, timed their movements and then analyzed the data. As video footage improved, scientists examined recordings of crowd movement to study the density of the crowd and the speed at which most people moved. Now, sophisticated computer programs along with satellite images and street maps help researchers analyze and control crowds before events ever take place.

The British royal wedding of Kate Middleton and Prince William, for example, was studied in advance so that planners could anticipate issues. Researchers considered how people might arrive, circulate and eventually leave; the team layered 360-degree images from Google Maps underneath simulations, in which digital people (or “agents,” as they are called) demonstrated various behaviors to stimuli. The same approach has been used in planning for the Olympics as well as New Year’s Eve celebrations in major cities.

Spectators at the wedding of Prince William and Kate Middleton in London on April 29, 2011. (Credit: Thomas Dutour/Shutterstock)

In these analyses, researchers look to identify hazards, risks and threats — and then adjust the venue accordingly. Hazards are considered anything that could potentially harm a member of the crowd, such as an unlit staircase or an unseen slope. Risks are the potential that such a hazard might hurt someone, and threats are external concerns, such as the potential for an active shooter or terrorist attack.

In analyzing how people enter and circulate, researchers are able to recommend how an event should be structured. Erecting roadblocks can prevent a car from intentionally driving into a crowd, for example. Or perhaps a nearby subway station might be closed to avoid overcrowding by forcing attendees to walk in different directions to other stations.

Behavioral scientists began studying the psychology of stampedes in the 19th century. The idea of an irrational, panicked crowd was long considered the explanation for stampedes at religious gatherings, concerts, sports tournaments and festivals. Increasingly, however, researchers in disaster management are pushing away from the notion of the irrational mob and toward improved crowd management and venue design — especially because computer simulations have become sophisticated enough to incorporate various panic responses into different scenarios.

For example, one computer simulation tested crowd movement in an office fire scenario in which some of the digital agents had aggressive tendencies. The fire began in the middle of the office, among a maze of cubicles. Workers rushed to the hallway and toward the exits; some people froze with fear and moved slowly, while others panicked and tried to push their way forward. As the fire spread, a mass of people lumped near the exits, trying to escape while the aggressive agents surged forward.

Other simulations have relied on personality trait theory, which holds that people have varying levels of psychoticism (aggression and egocentrism), extraversion (associated with more daring behaviors) and neuroticism (linked to anxiety and shyness). Simulations can give agents varying levels of these traits and identify each with a different colored shirt. Red shirts, for example, might signify aggressive responses while brown ones indicate shyness. The traits produce a variety of responses, from attempting to push through a crowd to slowing down from anxiety. Researchers then time the agents in different emergency scenarios to determine how these behaviors impact evacuation.

Every 12 years, tens of millions of Hindu pilgrims travel to Central India for Kumbh Mela, a religious event in which people atone for their sins by ritual bathing. At the 2019 event, researchers documented crowds with phones and surveillance cameras as well as aerial shots from drones and balloons.

The researchers then used computer software to identify and examine the movements of real people as they entered the area and proceeded through various checkpoints. They then inputted the data into a crowd simulator to predict potential risks. The simulator used the Social Force Model, which holds that pedestrians are propelled by three social forces — their desired direction, a need for space from others, and borders and other obstacles — to analyze how the crowd responded to changes like a narrower border or a roadblock.

The future goal, however, is to create an early-warning system so that one day, event planners or local authorities will have as much as a 15-minute notice when a crowd crush is likely. Such advanced notice could enable organizers to combat the crush by, for example, turning away new arrivals or removing barriers — hopefully, saving lives.