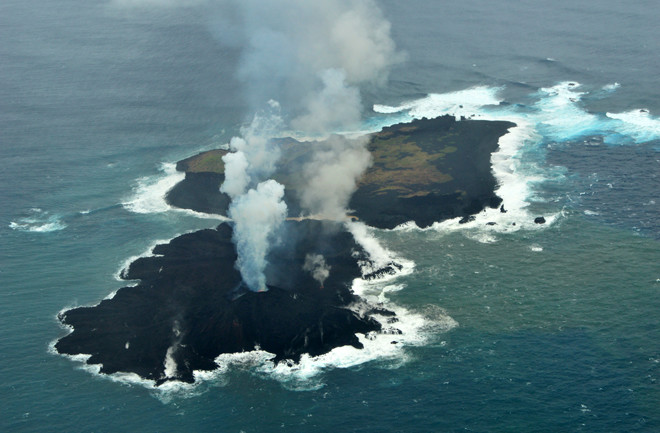 The eruption of Nishinoshima with the new island joining with the original Nishinoshima island, seen on December 26, 2013. Image: Japan Coast Guard Quick volcano news update from Japan! The eruption at Nishinoshima continues and now the new island is no more ... because it has joined up with the actual island of Nishinoshima (see above). This is a great example of how volcanic island like this in the Bonin Islands grow over hundreds to thousands of eruptions. Compare these two NASA Earth Observatory images to see how the island has grown between December 8 to December 24. The Japan Coast Guard has also posted a map (see below) that shows how the shape of the coastline for the new island has changed across the course of the eruption -- and it is dramatic how quickly the island has grown, especially between December 13 and 24. Some video taken from a helicopter flight above the volcano shows the new island and its continued eruption (with discolored water surrounding it) and a very active spatter cone producing the lava flows.

The changing coastlines during the current eruption of Nishinoshima in Japan from November 20 to December 26, 2013. Image: Japan Coast Guard.{Special thanks to Chris Pearce.}