Comets Are Teaching Us How to Make Breathable Oxygen in Space

The European Space Agency’s Rosetta spacecraft saw material and gases — including oxygen — erupt off the surface of Comet 67P/Churyumov-Gerasimenko. 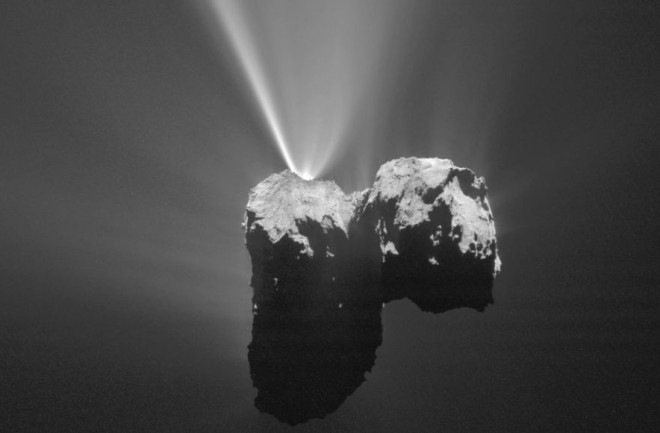 Space is an inhospitable place. For now, when humans go out in space capsules and stations, they need to bring their own air and water — and do without gravity — during their stay. In the future, if humans want to stay in space long-term (and they do), they’ll need to find these necessities in space.

Luckily, the bare essentials are already out there. Water is plentiful in asteroids. Gravity can be induced with spinning space stations. But oxygen can be hard to come by in the form we need. As an element, it’s ubiquitous. But humans need molecular oxygen, O2, for breathing, and that’s a lot scarcer.

New research from Caltech shows that comets make oxygen all on their own, and from a substance much more prevalent in the solar system: carbon dioxide. The surprising conversion, which occurs naturally on comets, could provide a way for future space-farers to create breathable air from a gas that humans expel with every breath, and which makes up the bulk of Mars’ thin atmosphere.

Researchers led by Konstantinos Giapis and his postdoctoral fellow Yunxi Yao, wanted to figure out why scientists sometimes see molecular oxygen streaming off some comets – for instance, Comet 67P/Churyumov-Gerasimenko, which was orbited and carefully studied by the Rosetta spacecraft from 2014 to 2016.

Comets can be busy places. They travel at fast speeds, and the transition from the icy cold reaches of the outer solar system to hot sunlight as they approach the sun can lead to dramatic changes on their surfaces. One of the phenomena that occurs happens when water molecules (hydrogen plus oxygen) are shot at high speeds onto other surfaces containing oxygen, like rust or sand, both common on comets. The reaction isn’t chemical but physical, as the hydrogen gets ripped away and the oxygen molecules stick together instead.

But water isn’t the only oxygen-containing molecule getting slammed into comet surfaces at high speeds. The Caltech researchers wanted to know if carbon dioxide could produce the same result.

Even though carbon dioxide (CO2) already has two oxygen atoms, they’re arranged in a line with the carbon atom in between. This means that most of the times it crashes into a surface and the molecule breaks apart, it will either splinter completely into C+O+O or break apart into CO+O. But something like 5 percent of the time, the molecule will instead fold into a triangle, connecting the two oxygen atoms. This is a weird, high-energy state for the molecule, and it doesn’t stay like that for long, breaking apart into smaller pieces almost immediately. But now, one of the possibilities is C+O2, resulting in molecular oxygen, the very stuff humans need to breathe.

Giapis and Yao tested this interaction by slamming carbon dioxide molecules into gold foil – gold having no oxygen of its own to cloud the results. But they point out that any material would work, provided the carbon dioxide impacts it at high enough speed. They published their results May 24 in Nature Communications.

The process is still unlikely – something like 65 times out of every 10,000 collisions, or less than 1 percent of the time. But the researchers are hopeful that with more study and by tweaking their technique, they might one day be able to farm oxygen, the fuel of life, from carbon dioxide, human’s waste breath.