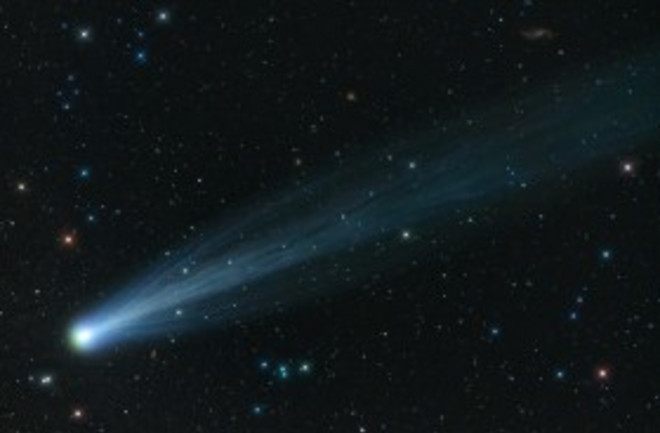 Astrophotographer Damian Peach captured this view of Comet ISON and its complicated tail on November 15. The field of view is 2.5°, five times the width of the full moon (Credit: Damian Peach) Today is make-or-break time for Comet ISON as it reaches perihelion, the point closest to the sun. At 1:25PM EST the comet will zoom just 730,000 miles above the solar surface, traveling at a speed of about 225,000 miles per hour. You can track the comet's progress live here. What happens during that passage will determine a lot about what the comet will look like in the next few weeks. Will it be a faint smear or a bright fuzzball with a long, lingering tail? Will it fizzle entirely? We are about to find out. Depending on the comet (and also depending on your skills as an observer and your local weather conditions) you might actually be able to watch as Comet ISON swings around the sun today. That's right: It is possible you could see it in broad daylight, though it won't be easy and you need to be very careful. Our friends at Universe Today have created a great guide for how to look for Comet ISON right next to the much, much brighter glare of the sun.

A map of Comet ISON's passage by the sun. (Credit: Universe Today, using Chris Marriott's SkyMap software) In the days after perihelion, Comet ISON will move into the morning sky, where it will become much easier to see. You no longer will have to worry about not staring straight into the sun! The viewing chart posted below gives you a guide of where to look, and my colleagues at Astronomy magazine have put together a comprehensive viewing primer that covers the ongoing movements of the comet in the coming weeks. Carey Lisse, head of the Comet ISON Observing Campaign, or CIOC, calls it the "holiday comet," because it makes its closest pass by the sun on Thanksgiving and will approach closest to Earth on Christmas day. What it will look like by then is anyone's guess.

Comet ISON's path through the sky, as seen from Earth. (Credit: Richard Talcott and Roen Kelly, Astronomy) Professional astronomers will be watching the comet two ways--looking for the same spectacle as the rest of us, but also scrutinizing it as an extremely unusual sample of the kind of material Earth and the other planets formed out of 4.5 billion years ago. For the full story on that, check out my feature on The Life and Death of Comet ISON. And keep checking back, both to my blog and to the rest of the Discover site, because there will be a lot more Comet ISON news coming soon. UPDATE (11/28 at 1pm): The CIOC team presents brand-new results showing Comet ISON fading as it approaches the sun, possibly because the rocky component of the comet (which insulates the icy material below) is vaporizing under the sun's intense heat. That suggests the comet is disintegrating, and won't leave much to look at in the coming days. Then again, astronomer Karl Battams adds that "at every single opportunity it can find, comet ISON has done completely the opposite of what we expect." And regardless of what happens next, Battams notes, "this is one of the more extraordinary astronomical events to happen in modern history, and we get to sit in our comfy chairs and watch a giant ball of 4.5 billion year old ice hurtle through the Sun's million-degree outer atmosphere at 0.1% of the speed of light." Don't cry for Comet ISON! Follow me on Twitter: @coreyspowell